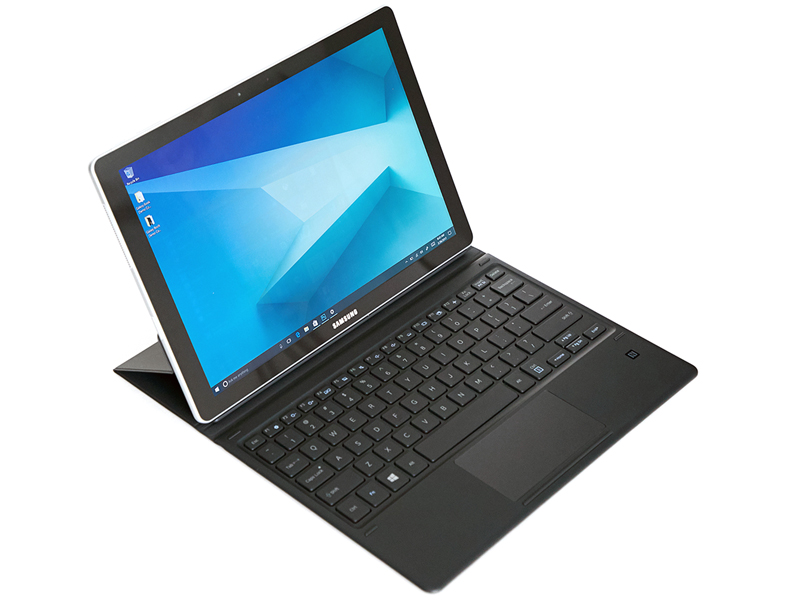 The successor of the Galaxy Tab Pro S and what looks like the initiative to create a whole new series is the Galaxy Book 2. This tablet with a 12-inch display from Samsung comes to offer the public an alternative to old-school laptops and revolutionize the idea of owning a tab. An ultra-slim laptop is sometimes just not enough in terms of portability, flexibility and configuration, but this tab promises all of these advantages. The main downside of the previous years’ tablets was the lack of a truly performant CPU and the ability to use demanding software. Galaxy Book 2 is proof that these needs can be fulfilled right away.

Being equipped with a highly efficient ULV dual-core CPU, 8 GB of RAM and a fast SSD, as well as a Super AMOLED display, this model is designed to change the way you will see these devices from now on. It is often compared with Microsoft Surface Pro 2017 and Lenovo IdeaPad Miix 720 and for very good reasons. Its keyboard, stylus pen and convertible design make it one of the best options that the market has to offer right now. Dive deeper into its specifications if you want to know more.

Being the largest tablet in this year’s line-up, it somehow looks like Microsoft Surface Pro, but if you look at it closer, you will observe a much thinner tablet and lighter chassis. Holding this tab is a pleasant experience thanks to its light weight, its smooth surface and slick bezels. It is highly portable, it expresses flexibility and it has a gorgeous shape. Samsung’s 12-inch tablet makes some users lose their interest due to the connectivity “innovation” that the manufacturer has pulled. The complete lack of ports makes users question their ability to connect the tab with additional devices when needed.

This isn’t your average convertible laptop. It is simply a performant tablet that includes a comfortable-to-use keyboard. The two mixed together result in a gorgeous design that most users appreciate when coming in contact with the tablet for the first time. This is the slimmest Windows tablet on the market, being a strong competitor for the Surface Pro. Galaxy Book’s downside and its great paradox is the fact that even though it was built to be used as a notebook, it cannot connect any peripherals, such as a mouse, a second monitor etc.

The 12-inch screen of this tablet is one of its most impressing features. It uses a Super AMOLED panel; it has incredibly deep blacks, a maximum brightness of 301.68 nits and coverage as high as 99% of the Adobe RGB and 100% of sRGB color gamuts. If it excels in the black area, the situations changes for the display’s whites. Although this isn’t tragic, it is worth mentioning that white aren’t the cleanest. When used with the included stand, you will observe that a 180-degree viewing angle was achieved by Samsung. The display’s resolution is crisp and the colors are as vibrant as it gets. Another important thing that you will notice is that the screen has instantaneous responsiveness and the pixels are almost invisible when touching the display using the S Pen.

Users who have tried the Galaxy Book 2 so far cannot complain about the sound quality either, as it has been described as clear, crisp and loud enough to be heard in a conference room.

It is practically impossible to expect less than a powerful configuration in a tablet such as this one. Samsung equipped with beauty with a U-series Intel Core i5 CPU and gives potential buyers the ability to choose between a 4 GB or 8 GB DDR3 memory, as well as between a 128 and 256GB SSD. Giving the fact that most users like their products to be as customizable as possible, this actually worked in this case. In terms of speed and ability to multitask, this tablet is ideal for daily tasks that you have to solve on the go. Its SSD isn’t the fastest on the market, but it is capable to read 526.6 MB/s and write 500.6 MB/s , which is satisfactory.

This product’s battery isn’t promoted as strong and durable just for the sake of advertising. In a busy day, when you need to navigate, watch videos and work non-stop, its battery will last 10-11 hours. This is more than most Windows 10 convertibles on the market have to offer. There is a good reason why it doesn’t do even better, though. Keep in mind that this is a detachable model that powers its keyboard, too. When discharged, it will fully recharge in a little less than 3 hours using Samsung’s Adaptive fast charger.

Should you buy the Samsung Galaxy Book 12”?

Samsung Galaxy Book 2 comes with a large display and top performance that will satisfy the needs of those who crave high-end technology, in search for better results and increased productivity at work. This tablet excels in those areas and it is capable of giving all the benefits you need for a device in its class. However, it has some downsides that not everyone is comfortable with. One of the things that could influence your decision is the fact that it is equipped with a 13 MP rear camera and a 5 MP front camera. Its connectivity limitations represent another factor that might make you question your decision.

Other than that, there are a lot of reasons why the Galaxy Book 2 is worth your attention and your money. Its 7 th generation processor and its generous RAM are two of the things that contribute to its strong configuration. As for its battery, although it has to share it with the included keyboard accessory, its capacity is high enough to satisfy your daily needs. More than that, Samsung offers a mixture of tools that users can take advantage of, such as Pen options and Battery Life Extender tool that can be used at any given time. Another recommendation that Samsung has for its users is to avoid charging the battery past 85% to prolong its life.