In a market controlled and stifled almost exclusively by Apple and Amazon, the emergence of Alcatel as a producer is a welcome breath of fresh air. What separates Alcatel from the herd is that they remain one of the last bastions who still produce high-quality yet relatively affordable Android tablets.

However, like practically every company, they produce a forest of different tablets year on year. So, to aid you with picking the best tablet you can get from Alcatel, we’ve collected and reviewed four of the most popular tablets produced by them. 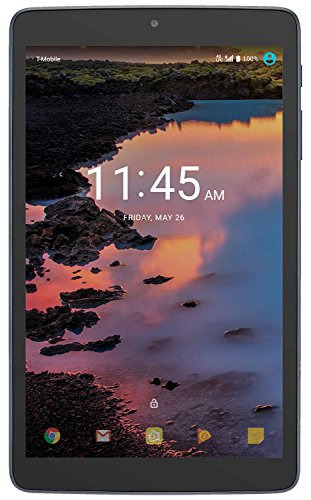 In a market where overequipped powerhouses dominate one end and on the other, flimsy, lacklustre devices, finding the sweet spot in between can be difficult. The Alcatel A30 delivers in this regard by finding a middle ground by balancing performance, functionality and, price.

Design-wise, the Alcatel A30 is built like a small, black brick – a slick black brick in fact. It also is composed of a textured matte layer on its back that makes for easy gripping while despite a mainly plastic build, flexing is minimal.

The tablet’s vibrant display measures out at 8-inches in length and is paired with a resolution of 1200 x 800 which guarantees an immersive experience for any sort of viewing from movies to e-books to gaming.

With a 1.1GHz processor and 16GB of memory, most apps should run silky smooth though we’d recommend taking advantage of its expandable storage as 16GB is often not enough. With a self-reported battery life of 14 hours, this tablet should keep you engaged for the entire day.

The A30’s camera is fairly decent as well with a 5-megapixel resolution on both the front and rear end cameras – so whether you’re talking a cheeky selfie, filming a sunset or video calling your boss, you don’t need to worry about looking pixelated. Another strong point is its cellular connectivity that covers not just Wi-Fi and Bluetooth but GSM 3G, 4G, and LTE.

Despite all this, the Alcatel A30 still remains highly portable with a total weight of 0.79lbs paired with its compact dimensions of 8.23 x 4.88 x 0.33-inches. You could slip it into your bag and not even feel its presence.

Now don’t get us wrong, this tablet isn’t perfect. If had to be nit-picky, we’d point towards its small speakers.

These are lackluster when compared to the competition so if you have any grandiose dreams of treating the A30 like a jukebox then look elsewhere. Regardless, we firmly believe that this all-rounder will be just right for the average user. 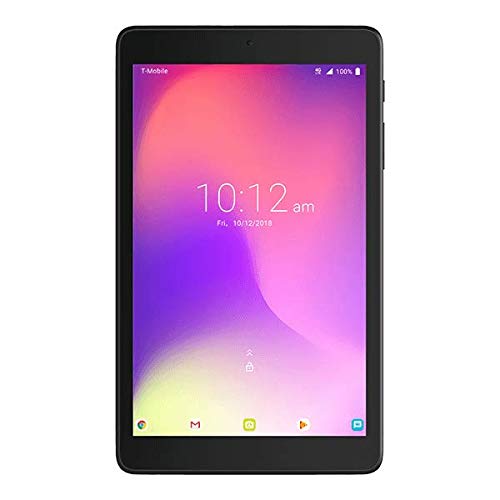 Stepping up into the higher mid-price bracket, the Alcatel 3T comes with the familiar design we all recognize and love. Slim, lightweight and study, this device will fit comfortably in anyone’s hands.

The display spans 8-inches with a resolution of 1200 x 800 covered by a thin layer of Asahi Glass over an IPS LCD. It’s not the most beautiful display out there but it’ll still display great content at 720p.

Unlike the A30, the weight is slightly beefier sitting at 1.19lbs but we don’t think this will be too noticeable.

The processor is a MediaTek Quad-core (1.5GHz), paired with a RAM of 2GB and 16GB of in-built storage. While it won’t hold a candle to say, a small laptop, it will do the job for anything you’d want in a tablet.

Once again, we don’t think 16GB of memory is sufficient, but this is upgradeable to 128GB through the microSD slot. The catch is that the battery life isn’t fantastic but will still run-up to a solid 6 hours of casual use.

The camera is a step up compared to the A30. While the selfie-camera remains at 5-megapixels, the rear camera can take photos up to 8-megapixels. Again, while these specs work just fine for the general user, they aren’t going to do you any favours if you dabble into professional photography.

Connectivity shouldn’t be an issue for anyone – though it only holds a single micro SIM slot, it supports Wi-Fi, Bluetooth, LTE and the like. While there aren’t any red flags on the Alcatel 3T, one thing to note is that if you’re a fan of fingerprint scanners, you’d be disappointed by its non-presence. 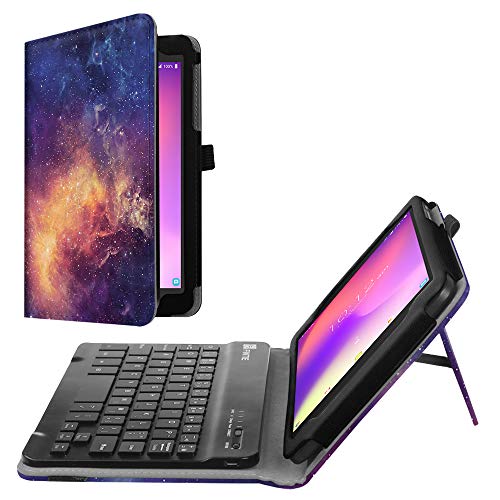 Now looking at this bonus, you may be thinking ‘why should I get a keyboard for my tablet?’ and you won’t be wrong for thinking that. If you really wanted a keyboard, why not get a full-on laptop?

The answer is simple: tablets are more portable and convenient and adding a keyboard to the mix, brings them closer to replacing the weighty laptop. Not only will it make typing easier on your tablet, but you will also have a far more comfortable time typing with real, hard keys instead of hammering away frantically on a flat glass screen. Tactility is the name of the game.

So, we turn to the Finite Alcatael Joy Tab. Designed specifically for the Alcatel 3T and A30 models, you get a top-of-the-line leather-covered hard detachable laptop-style keyboard that can be connected to your tablet simply by toggling Bluetooth.

What makes this a steal for us is how it comes not with your regular, soft and cheap silicone keyboard but rather, a full-on spring mechanism beneath every key.

Not only does this add a satisfying feel through every letter you will type but in terms of durability, soft materials tend to degrade and wear out far quicker. It also fits the form of your tablet perfectly and weighs only 0.94lbs so you need not fret about added baggage. 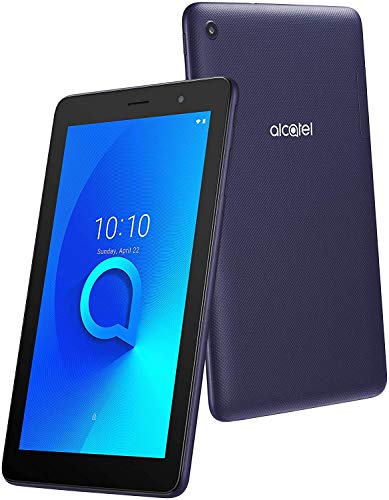 Falling back to the lower end of the price spectrum, the Alcatel 1T Tablet is the most affordable entry into the world of tablets on our list. It comes with relatively good specs, but you have been warned, the low price does come with a noticeable cost.

Price is generally what you pay for and for the 1T. It’s not that you are paying for a poor product – it’s entirely decent – but it just does not compare to the other options on our list.

At first glance, like its sibling products, the design is similar in terms of form factor. The size of 7-inches and resolution of 1024 x 600 while totally adequate for the low-price bracket of tablets, is not anything to be impressed about.

You won’t find breath-taking, vibrant or universally solid viewing angles from this device. However, it does weigh almost nothing at just 0.54 lbs. Flipping the device around also reveals a 5-megapixel back camera which as we mentioned earlier, is decent enough for daily tasks.

Performance-wise, it runs on a Chipset Processor (1.3GHz) and has 1GB of RAM. These may be perceived as weak by some, but we were pleased when using the 1T at how it wasn’t as slow as expected. We were able to run light games and apps from Temple Run 2 to Netflix without a hassle. That being said, you shouldn’t intend to use this as your primary media device as you’d be disappointed.

This tablet will struggle with heavier usage including  graphically demanding games to intense video editing. On that note, the storage space is dismal – holding only 8GB; probably insufficient for even the most casual of users.

The biggest surprise this tablet holds is its solid battery. This tablet despite its price tag can last for up to seven hours of heavy usage with reports claiming it can last for hundreds of hours on idle. 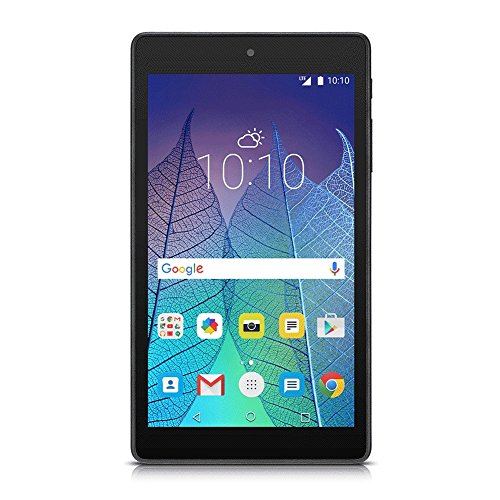 Staying within the low-price bracket but going a little higher, we encounter the Alcatel POP Android 7-inch. This thing aims to identify with users looking for a decent bang for their buck.

In the world of cheap tablets, its crowning achievement that sets it apart from the rest is clear: blazing-fast 4G connectivity. Leaving that aside, for now, let’s break it down.

The display pans 7-inches over a TFT screen and has a resolution of 1024 x 600. Make no mistake, this may be acceptable to some but for us, this is pretty poor pixel density, but we’ll forgive this given the price.

Its build tells a similar story. While the design isn’t innovative or particularly eye-catching, – bordering on bland –  it still is very functional and relatively durable.

With the Alcatel POP also coming in solid colours, it feels like a sturdy brick in your hands. We did say brick, but we meant light brick, 0.62lbs to be specific. Portability is the essence of the Alcatel POP after all. Usage-wise, ergonomics is taken quite seriously from weight to ease of use even with just a single hand.

Looking inside the tablet, the Alcatel POP runs on Snapdragon (1.2GHz). The quad-core paired with 1GB of RAM may be a great deal for its price, but it won’t come close to the processing power of say, an iPad.

Where it falls especially short is in its memory. With just 4GB of storage -barely half is usable – the upgradable option to 32GB via a microSD will almost certainly be leveraged by all users. Looking at its battery life, it clocks a decent 7 hours, but our usage shows it drains considerably quicker while using 4G.

Now flipping the device around reveals the 2-megapixel rear camera. This is the poorest on our list and we suspect you probably won’t be bagging any photography awards with this device. Though, for general use, it shouldn’t make much of a difference.

4 Things to look for in an Alcatel Tablet

Much like any other tablet be it an Alcatel or Amazon, your requirements should feed directly in deciding what tablet is right for you. There is no finite list of things you should consider but here are four key things that should always cross your mind:

Portability: This includes both weight and screen size. We don’t think the weight will generally be an issue for most tablets (especially the ones we’ve listed) so screen size is what you should worry about. ‘Smaller’ tablets of 7-inches or less will easily fit on one hand and are almost comparable to mobile devices. You’ll be able to scroll with a flick of your thumb, access social media, Instagram and the like with ease.

Larger tablets will add bulk but will have more processing power and storage space and will be more appropriate for serious editing, movie viewing, and gaming.

Power: By this, we refer to pure processing power. Cheaper models usually come with single-core processors as in Alcatel 1T and is ideal only for basic tasks like e-Books and surfing the web.

Expensive models come with multi-core processors that can handle more demanding tasks and apps like Final Cut Pro. If you’re just looking for a device to kill time with at home, processing power shouldn’t matter too much. But if you’re looking for a tool to take to your job at an architecture firm, we’d recommend not skimping out.

Connectivity: With tablets today, access to the Internet is almost an implicit requirement. No connectivity means no messaging and no downloads. So, consider whether you need just Wi-Fi access (especially if you plan to move around your home and public spaces) or cellular if you intend to treat your tablet as a phone.

Price: When it comes to price, the general rule is you get what you pay for. Cheaper tablets come with weaker hardware and features while the more expensive variants will be equipped with top-of-the-line features.

Whether you are looking for a tablet for casual browsing or a powerhouse to create corporate presentations, don’t just go for the cheapest or most expensive. Are you an artist? Are you looking for something for your kid? Or are you a student? Look at your own needs first.