Acer’s Iconia W3 released as one of the first eight-inch Windows 8 tablets, but the mediocre design and poor display prevented it from taking advantage. Acer tablets have been hit-or-miss since then, and now the manufacturer returns to the eight-inch space with the Windows 8.1-powered Iconia W4.

Are the results better the second time around?

While it doesn’t hold up against premium devices, the Acer Iconia W4 is about average compared to tablets such as the Lenovo Miix2 and Toshiba Encore. At 8.6-by-5.3-by-0.43 inches and 0.91 pounds, it’s slightly thinner and lighter than the W3, though it isn’t as svelte as the Miix2.

It’s fairly comfortable to hold, but despite the decent construction quality, the decidedly plasticky body produces a device that just feels cheaper than it should. 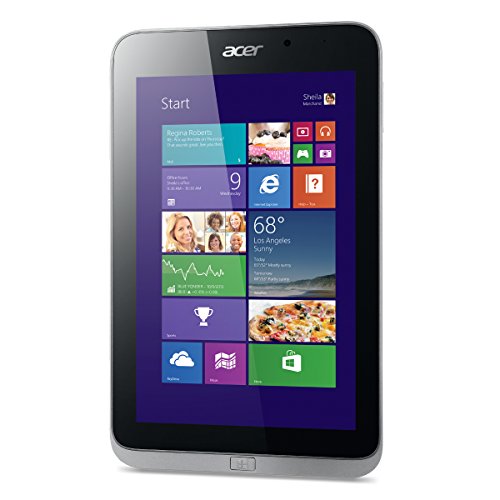 Taking a tour around the Iconia W4, the power button is alone on top. There’s a volume rocker, micro-HDMI and microSD card slot along the right edge. The left edge is bare, while the bottom sports a 3.5-millimeter headphone jack, micro-USB socket, and two stereo speakers.

There’s also a physical Windows button on the bottom bezel. The connectivity options may not blow you away, but the inclusion of a video-out is a nice touch. An optional Bluetooth “Crunch” keyboard is also available.

In tablet comparisons, the Iconia W3’s biggest downfall was its abysmal display. Acer has sought to address that problem here, fitting the W4 with a 1,280-by-800 pixel IPS panel that’s far superior to its predecessor.

The viewing angles are significantly better this time around, and Acer’s Zero Air Gap design enhances performance in all lighting conditions. Unfortunately, the resolution has stayed the same.

Considering the proliferation of full 1080p displays at nearly all price points in recent months, the W4’s 189 pixels per inch just seems like a letdown.

Along with the new display, the Iconia W4 also benefits from some new innards. A quad-core 1.33-gigahertz Intel Atom Z3740 processor is joined with two gigabytes of RAM to produce a fairly smooth user experience, at least during routine tasks. Windows generally responds as expected, and most apps open and close quickly.

The W4 doesn’t offer nearly enough power to be a legitimate laptop replacement or productivity option, but it performs pretty well versus the similarly specced Lenovo Miix2 and Toshiba Encore in a tablet comparison.

Comparing tablets, the Acer Iconia W4 is better than its predecessor in virtually every way. However, despite several advancements, the Acer tablet is only now breaking even with competitors like the Lenovo Miix2 and Toshiba Encore.

Hardware specifications are mostly identical and, although the W4 runs smoothly, there are few differences between devices. The W4 does boast a better display than the Encore, but the Miix2’s panel is superior to both. The build quality is better than the Lenovo slate, but the reliance on plastic materials still feels cheap compared to tablets with better construction.

As might be expected, many customers have commented on the tremendous improvement from the Iconia W3 to the W4. The improved display is a common point of praise, with customers enjoying the much wider viewing angles and better visibility outdoors.

The inclusion of a micro-HDMI port is also a welcome addition, and most users find the performance to be solid. Conversely, some users have complained of software errors and a lag in the Bluetooth response. Some customers have also experienced crashes and other problems while charging the Iconia W4 overnight.