When RCA, a company renowned for their television sets and record players, released their 11 Maven Pro tablet, many doubted it would do anything other than fade into obscurity. Instead, the 11 Maven Pro became one of the best-selling tablets in America, for a wide variety of reasons and despite its flaws.

Here’s our review of this budget-friendly tablet. 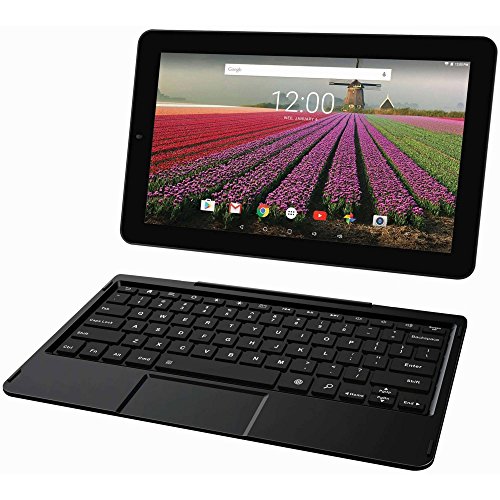 The large 11.6-inch screen is what instantly catches the eye, but apart from the vivid screen, the device isn’t really visually striking and doesn’t really stand out or look too unique or original. Overall, however, it looks decent, albeit not extravagant or special.

Aesthetics aside, the 11 Maven Pro feels good in hand, has good grip and doesn’t feel nearly as chunky as it may look, not even when held for longer periods of time. Most tablets these days weigh below 1.75 lbs, which makes this 2.8 pound RCA model quite heavy, but that is to be expected in a larger, 2 in 1 device.

All in all, the design and build, although decent, are certainly not the highlight of this model, but should satisfy the casual user.

Equipped with 1 GB of RAM and 32 GB of ROM and a 1.4GHz quad-core processor, the 11 Maven Pro doesn’t belong to the high-end category of 2 in 1 devices, but this configuration does the trick too and ensures more than decent performance.

The detachable keyboard is accurate and typing on it feels good and natural. It doesn’t feel too small, which should provide the user with enough space for more than just quickly typing out an email.

The highlight of the 11 Maven Pro is its large, vivid display. It has great touch response, good viewing angles and its size is what makes it so beautiful to look at, easy to use and incredibly convenient. Watching films or taking care of business on the 11 Maven Pro should definitely not be a problem for anyone.

Camera and speakers, on the other hand, are nothing extraordinary. In fact, the 2 MP camera is certainly a let-down, while the speakers are too small. Fortunately, most users probably don’t want to use their tablets, especially 2 in 1 devices, for snapping photos, so this is certainly not a huge flaw.

This RCA 11 Maven Pro runs on the Android 5.0 Lollipop operating system and certainly doesn’t excel performance-wise, but it performs well and without lag.

Browsers, Google Play store, media players and everything else, run pretty good and the tablet performs fast and in an efficient manner.

Given the relatively low-end hardware, playing demanding games is out of the question, but browsing the internet, watching YouTube videos or films, conducting work and everything else a casual user might want should not be an issue.

With all that said, the 11 Maven Pro doesn’t really compare to some 2 in 1 devices out there, but that is to be expected as this is a budget-friendly tablet for casual users, not looking for a top-performing mini laptop of sorts.

When it comes to battery life, the device can run up to 8 hours on full charge, which is another pleasant surprise and certainly something that often means a lot to users who move about and carry the device around with them often.

The RCA 11 Maven Pro is the perfect 2 in 1 gadget for casual users looking for a tablet/laptop hybrid that gets the job done quickly and efficiently, but doesn’t cost a fortune. Great for students and businessmen who don’t need a top-notch tablet to play with, but want a good device with good performance for everyday use.