Affordable Chinese tablets have penetrated Western society and taken the low-end of the market by storm. These tablets are often a combination of good performance and great value for the money, sometimes called “clones” of their Western counterparts.

One such clone is the MediaPad M3 – Huawei’s version of the iPad Mini 4 that runs on the Android operating system.

Is the MediaPad M3 more than just a poor man’s iPad Mini? 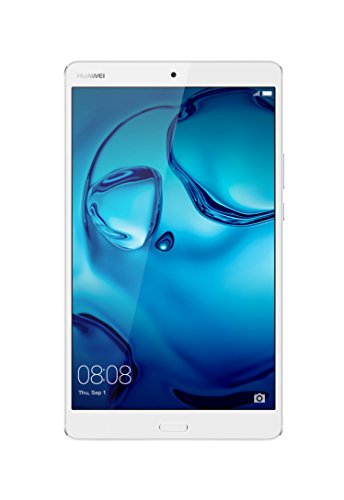 When it comes to aesthetics, the same formula that’s used on many Huawei’s phones has been applied to the MediaPad M3 – clean line, slanting edges and a metal unibody are all there. Thanks to the sleek aluminium design, the MediaPad M3 manages to feel solid, while remaining pretty lightweight.

The aluminium design also brings a touch of modernity, making the tablet look and feel posh and expensive, for want of better terms. This is definitely a step in the right direction – even though Chinese tablets have evolved incredibly fast over the last couple of years, some of them still tend to look and feel low budget.

Sadly, there aren’t too many ports, but at least the obligatory microSD card slot and headphone jack are there. This is a bit of a disappointment, since Chinese tablets usually have a large number of ports.

Huawei MediaPad M3 review: Tablet is like a giant P9

The MediaPad M3 has a fingerprint reader, like most high-end tablets nowadays, especially those that run on the iOS operating system. The sensor is fast and accurate, so this can definitely be considered a nice addition too.

What matters the most though, is battery life and this is where the MediaPad M3 almost excels. Almost 10 hours of battery life can be expected even during film watching and gaming, which is great.

The 8.4-inch display, with a 2,560 x 1,600 resolution (353 pixels per inch) could have been one of the highlights of this tablet, if not for a couple of annoying issues. Colors are vivid, viewing angles are great and everything else, including details and brightness is very much what you’d expect from a high-end tablet.

Watching movies on the MediaPad M3 is great, but the 16:9 ratio does make web browsing and book reading a tad bit uncomfortable. The only bad thing about the display is the reflection. Using the MediaPad M3 outside on a bright day is almost a no go.

All in all, apart from a few minor issues – the biggest one being the lack of ports, the MediaPad does not disappoint when it comes to design and build. This is a modern, high-end tablet.

The Huawei MediaPad M3 isn’t style over substance. In fact, this tablet outperforms the iPad Mini in quite a few different ways. When tested, it even performs better than the Samsung Galaxy S2 8.0, which is widely considered one of the best Android tablets for gaming around this price point.

Interestingly, the MediaPad M3 features a split-screen. It is activated by long-pressing the recent apps button and works with many different apps, which can be very useful for those who plan on using their tablet for both business and entertainment.

Chrome, YouTube, Maps, email clients, calculator apps – they can all be opened in the split-screen mode. However, since this is an 8-inch tablet, the split-screen mode does seem a bit redundant – isn’t this feature unnecessary on small screen tablets? Still, innovation and effort should always be welcomed and encouraged.

Since this a media tablet, speakers are pretty important. Luckily, they are surprisingly decent. Unlike most tablets at this price point, the MediaPad M3 features two speakers – one at the top and the other one placed at the bottom of the tablet.

Having dual speakers works great for the MediaPad M3 and the audio quality is pretty good too. The lack of bass might be something audiophiles will notice, but those that just want to watch a few movies or listen to music probably won’t mind.

Huawei has had some issues with the Android operating system in the past, especially when it comes to notifications and similar details, but an improvement is apparent in the MediaPad M3. Everything works well and, generally, tablet performs really good – it’s fast and as efficient as it can be.

Equipped with a 2.3 GHz octa core processor and 4 GB of RAM, the MediaPad M3 can easily handle demanding games.

Its cameras can also be considered surprisingly decent. The back cam is 8 megapixels, while the front one is a 5-megapixel camera. We’re used to low-end cams when it comes to Chinese tablets, so this is a pleasant surprise.

In conclusion; although a little short of spectacular, the performance of the MediaPad is pretty much as good as it can get at this price point.

Although not a budget model per se, the MediaPad offers great value for the money and outperforms many of its popular (and some would say overpriced) Western counterparts. This is a great multi-purpose tablet that won’t burn a hole in most budgets.

The MediaPad has just about everything an entertainment-seeking user could need and more. Definitely highly recommended.