Truly a one of a kind device, Gamepad’s newest tablet – crowdfunded on Indiegogo, the GPD WIN is a breath of fresh air and an almost ground-breaking attempt at mobile gaming. The right idea is clearly there, but has it been executed properly?

The GPD WIN is an intriguing device, even visually, and looks more like a mobile gaming console than a tablet. However, it aims to combine the best of both worlds. A lot of people tend to compare it to Nintendo DS and, in some ways, the comparison makes sense. By its nature, this is primarily a gaming device and it ought to be viewed as such.

Two small joysticks, a d-pad and the ABXY buttons are very reminiscent of those typical for Sony’s gaming consoles, such as the famous PlayStation. A mouse switch button, which enables the user to turn one of the joysticks into a mouse is placed between them. Although a nice little feature, this doesn’t really help much and perhaps most users would be better off simply using the touchscreen. However, the mouse switch function works well, although it may take a bit of time for the average user to get used to using it instead of the traditional mouse.

Although small-sized, the keyboard is highly functional and intuitive. The only possible downside for some could be the size – if you’re used to typing on regular, laptop-sized keyboards, it might take a while to get used to writing on this one. That is understandable, considering this is a pocket device.

A decent number of ports, including a HDMI port are located on the back of this light, compact device. Although it weighs only 1.3 pounds, the GPD WIN is sturdy and feels comfortable in the hand. The 5.5 inches sized display with the resolution of 1280 x 720 pixels has decent viewing angles and the colors on it are bright and vivid, while the touchscreen is highly responsive and intuitive.

All in all, when it comes to design, the GPD WIN delivers both as a handheld gaming device and as a tablet. What about performance? 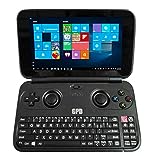 Equipped with 4 GB of RAM, an Intel graphics 405 card and a quad-core Atom processor, the GPD WIN offers an enjoyable, albeit not too powerful gaming experience. Older games, like for example, Batman: Arkham Asylum, are perfectly playable on the GPD WIN.  They run surprisingly smooth, the controls are intuitive and easy to use.

The GPD WIN runs on the Windows 10 operating system and although it is primarily a gaming device, simple browsing tasks are a breeze for this tablet. Although the screen is good enough, it could have been a bit brighter. Sadly, using the tablet outside or in a brightly lit room is not an enjoyable experience.

The audio is loud, but not of the highest quality and the speakers are placed at the sides, which means your palms pretty much cover them while playing games. Perhaps plugging in a pair of portable gaming speakers would be a good idea if you’re looking for a decent audio gaming experience.

The short battery life is probably the biggest flaw of the GPD WIN. Under constant gaming the battery usually lasts for about 3 hours. If you’re not playing games it can last up to 5, but even this isn’t nearly enough to ensure a comfortable pocket gaming experience. After all, the point of portable gaming consoles is to play games on the go and wherever you want. Fortunately, the GPD WIN uses a standard USB-C type connector for charging, which means you can connect it to a power bank if you have one, instead of looking for a wall socket.

All in all, the GPD WIN performs very well and perhaps much better than expected, considering the price. The biggest problem is the short battery life, but if you’re willing to look past that, this might turn out to be just the tablet that suits your needs.

Rarely do we ever come across such a unique handheld device. A cross between a tablet and a handheld gaming console, the GPD WIN is not without its flaws, but it is a great device that delivers on both ends – it’s great for gaming and it’s great for regular, everyday use. With the battery life being its biggest issue, the GPD WIN represents a window into the future of handheld hybrids. And, judging by this tablet, we have something to look forward to. Hopefully the GPD WIN will inspire the next generation of tablet designers to step into the arena of portable gaming, but even if it doesn’t it’s good enough to stand on its own. 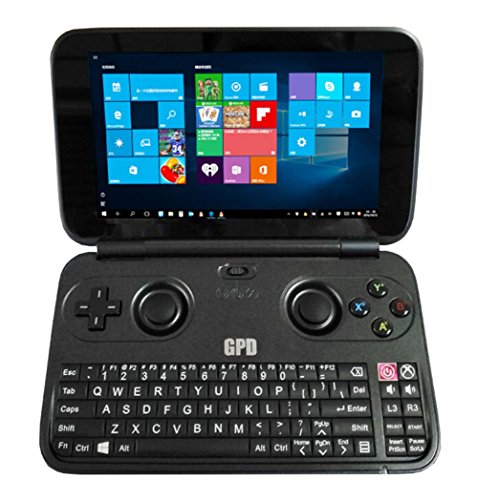