What sets this tablet apart from its competitors can be found in its name; transformer. This is the optional docking station, with full QWERTY keyboard that is available to increase the tablets’ battery life by 6 hours and turn it into a mini pc to use in your home or office. 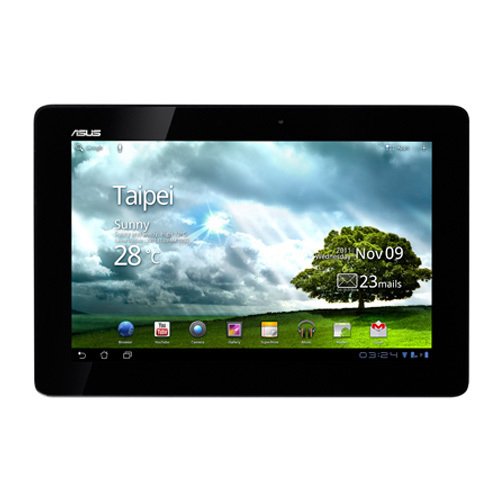 Without the docking station this is one of the lightest, 1.29lbs and thinnest, 0.33″ tablets on the market. It is powered by the super fast NVIDIA® Tegra® 3 Quad-core processor, 1.3 GHz of power and available in both 32GB and 64GB versions and in Amethyst Gray and Champagne colors. In addition it comes with 8G life time ASUS web storage space, perfect for photos and music files. The ASUS transformer is a larger tablet at 10 inches, slightly bigger than an ipad2 and runs on the Android Honeycomb 3.2 operating system which is fully upgradeable to the 4.0 ice Cream sandwich operating system. The screen is made from Corning Gorilla glass, which is super tough and ultra responsive, is LED backlit, operates through a capacitive pressure-sensing multi touch display, and it has a 178° viewing angle and a resolution of 1280 x 800.

The screen’s brightness and design enables use of this tablet in sunlight and it is very portable but despite its thinness very tough. The front camera is only 1.2 mega pixels but the rear facing camera is 8 mega pixels, has auto focus, flash and a large F2.4 aperture. With built in stereo speakers based on Sonic Technology and playback at 1080p HD video plus 3D gaming, this makes the ASUS Prime a great gaming and entertainment tablet. Battery life is around 12 hours, extendable by using the optional docking station, which will add approximately 40% to the overall price. The Honeycomb operating system gives access to around 500,000 Android apps and supports Adobe Flash. Connectivity is enhanced by a MicroSD card reader and micro HDMI port.

ASUS have a system called ASUS launcher allowing users to access and manage content, launch software and connect devices such as in “My Library”, consolidating all downloads into one bookstore; in “My Net” they can stream digital media across all compatible home systems and in “My Cloud” they can use cloud based storage to access digital content anytime, anywhere, even remotely controlling any PC or Mac system.

The quad-core processor rivals the ipad2 technology in its speed and performance and is commented on positively by the majority of users. Customers who upgraded to Ice Cream sandwich have noticed smoother and faster operations, so it is worth going for this new operating system. The spun metallic cover is beautiful to look at and gives the tablet a lovely feel but it does interfere slightly with the WiFi connection, although the reduction is slight it does increase if you are streaming music via Bluetooth and browsing at the same time. ASUS are bringing out a plastic covered version, but you sacrifice some aesthetics for this. The industry reviews have given ASUS very high reliability scores, and it is Number 1 according to PCMag.com, SquareTrade and Q2 RESCUECOM’s report.

Two features set this tablet apart from others in the market; its quad processor and its docking station. The former delivers incredible speed and performance, the latter allows you to transform the ASUS Prime into a PC. In addition, a top feature is the screen visibility and resolution, making this a great tablet for entertainment with an enhanced viewing experience.