When it comes to tablets, Samsung certainly has no shortage of irons in the metaphorical fire. The South Korean manufacturer has produced a string of successful devices, the latest being a pair of new additions to the venerable Galaxy Tab line.

The Galaxy Tab S 8.4 and 10.5 are decidedly more high-end compared to tablets Samsung has released recently, and for the most part they live up to their price tags. 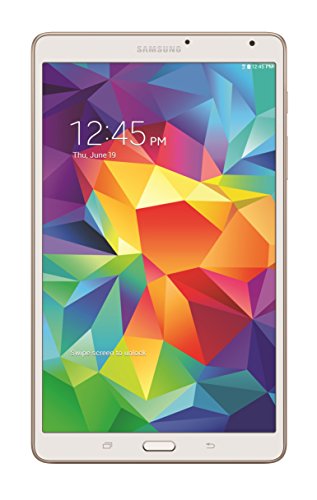 look an awful lot like an oversized Galaxy S5. The tablets share many similarities with their smartphone cousin, and that’s not a bad thing.

The Galaxy S5’s soft-touch backing makes an appearance, with a matrix of small dimples replacing the faux leather kitschiness that adorned previous Samsung devices. Construction quality is excellent, though the plastic body is a letdown compared to tablets with metal frames.

The big story, however, is the ludicrously thin design. Both tablets are just 0.26 inches thick, only fractionally bigger than the class-leading Sony Xperia Z2.

Comparing tablets, the Galaxy Tab S 8.4 and 10.5 each feature a 2-megapixel front-facing camera and an 8-megapixel camera in the rear, and both feature a physical home key and capacitive back and multitasking buttons on the lower bezel.

The ports and features are all the same, though the placement varies. On the Tab 10.5, the top edge sports a power button, volume rocker and IR blaster. The left edge is home to a 3.5-millimeter jack, while the right edge features a microSD slot and micro-USB port. Stereo speakers are placed near the bottom on either side as well.

The 8-inch slate sees the power button, volume rocker, IR blaster and microSD reader all moved to the right edge, while the 3.5-millimeter jack and micro-USB port are placed along the bottom.

Without a doubt, the star of the Galaxy Tab S show is the gorgeous 2,560-by-1,600 pixel Super AMOLED display. The display offers the same resolution as Samsung tablets such as the 2014 Galaxy Note 10.1 and Galaxy Note Pro 12.2, but the new panel is unquestionably more impressive.

The 8-inch slate benefits from an increased pixel count, but the ultra-high resolution still looks magnificent on the 10-inch model.

In addition to sharing a display, the Tab S 8.4 and 10.5 also share the same hardware. Both pack an eight-core Exynos 5 Octa processor and three gigabytes of RAM under the hood, which is similar to the setup powering several previous Samsung tablets.

Not surprisingly, some of the problems that plagued those devices have reappeared here. In particular, the performance is surprisingly uneven. Though the Tab S tablets undoubtedly have the horsepower to run just about anything you can throw at them, they are prone to some unexpected sputtering and delays.

The bigger problem, however, is the Magazine UX interface tacked on to the Android 4.4 base. It can’t be removed, and it can be unnecessarily restrictive compared to tablets running the unfettered OS.

All things considered, there aren’t many differences between the Galaxy Tab S line and the 2014 Galaxy Note 10.1 and Note Pro 12.2. The hardware is much the same, though the Tab S slates boast a fantastically thin and light design.

The Sony Xperia Z2 offers a similarly sleek design, but its average display just can’t stack up in a tablet comparison. The Xperia does provide more consistent performance, but it also lags behind the Galaxy Tab S in terms of battery life.

When it comes to the whole package, though they’re far from perfect, the Galaxy Tab S 8.4 and 10.5 certainly offer a lot to like.

Lisa Gade at MobileTechReview made the following video. Don’t get distracted by her hands – she’s got a cat!