No one can accuse Samsung of not being bold. After having been somewhat overshadowed by the successful Note line, Samsung is bringing back the Galaxy Tab in a big way. A premium device intended to compete with the likes of Apple’s iPad Mini, the Galaxy Tab Pro 8.4 is one of the most audacious Samsung tablets to date.

The price tag may compare with the iPad, but does the tablet itself? 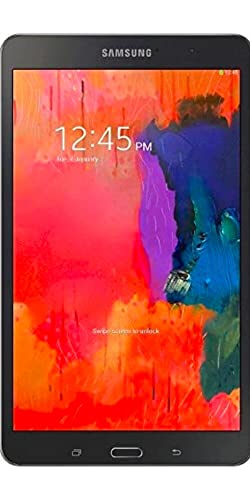 The 8.4-inch Galaxy Tab Pro is slightly larger than the standard 8-inch form factor, providing a bit more screen space without compromising portability. At 8.62-by-5.05-by-0.28 inches, it’s a bit taller, narrower and thinner than the iPad Mini with Retina.

At 0.73 pounds, it’s fractionally lighter as well. The stitched faux-leather design appears again here, which may be good news or bad depending on your preferences. The build quality is good and, despite the plastic shell, the Tab 8.4 feels like the premium device it claims to be.

Touring around the Galaxy Tab Pro 8.4, there’s a standard 3.5-millimeter jack atop the device. The power button, volume rocker, microphone and IR blaster are arranged along the right edge, while the left side is reserved for a covered microSD card slot.

The bottom is home to a micro USB 2.0 port and a pair of stereo speakers. It’s slightly disappointing to see no USB 3.0, but it’s far from a deal breaker.

Tablet comparisons often center around the all-important display, and in this regard the Galaxy Tab is a clear winner. Samsung has packed more pixels into the Galaxy Tab than nearly any other device on the market, with the 2,560-by-1,600 pixel display adding up to a superb 359 pixels per inch.

The Galaxy Tab Pro is powered by a beefy 2.3-gigahertz Snapdragon 800 processor and two gigabytes of RAM. It’s impressive hardware, and there’s little to complain about here. In a tablet comparison, the Galaxy is consistently near the top of its class in terms of performance.

The reskinned Android 4.4.2 KitKat operating system is very snappy; apps launch quickly, routine tasks are handled with ease and most games zip along without issue. However, even this powerful hardware can occasionally struggle with some high-end games because of the ultra-high resolution.

It’s no secret that Samsung is targeting the Apple iPad Mini’s market, and in some ways it’s successful. Comparing tablets, the Galaxy’s panel is even more gorgeous than the much-ballyhooed Retina display, and it’s even thinner and lighter.

The iPad Mini does offer somewhat better performance, however, and it also boasts slightly better construction quality. The LG G Pad 8.3 is an interesting choice for the budget-minded, though it can’t compete with the brilliant display and strong hardware offered by the Galaxy.

As expected, customers rave about the Galaxy Tab Pro 8.4’s superlative display. The performance is also a point of praise, though some users have experienced slowdowns and stuttering during heavy load. Some have found the price to be too high, though many others consider it to be in line with the tablet’s premium hardware.

The Galaxy Tab Pro is generally considered to be the best alternative to the iPad Mini for those who prefer Android over iOS.