After an unusually long gap (see our Samsung Tablet Timeline here) Samsung is back with two new entries in the tablet PC market. The Galaxy Tab A 9.7 is the unofficial follow-up to the Tab 4 10.1, and there’s an 8-inch version too. They are aimed at a very competitive segment – the space between budget and premium. 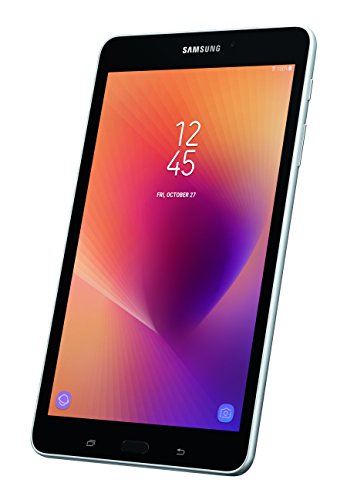 The initial response when picking up either device is to think, ‘Ugh, so plastic.’ An inspection of the frame reveals that the bezels are quite big when holding it in landscape mode. So far, so meh. But it doesn’t take long for those first impressions to ebb away. Plastic has some advantages – no fingerprint smudges – and actually the build quality is very high. The standard twist test showed no flex, and the Tab As feel solid if not sexy.

Typically for a Samsung tablet, there is a physical home button plus capacitive function keys either side. This is both convenient (for they don’t take up space on the screen) and irritating (when you accidentally touch the back button and lose an email you were typing). It’s worse in landscape mode.

Power and volume buttons are on the right, while on the other flank there’s space for up to 128GB of microSD (with safety flap). The microUSB and headphone ports are at the bottom, which will frustrate some and delight others. Also on the bottom, the 8.0 has one speaker, while the larger model has two, and are loud enough and decent enough. The main problem with them is that you’ll sometimes accidentally block one off with your hand.

Both the 8.0 and the A 9.7 have capacitive TFT touchscreens at a resolution of 1024 x 768. That means a lowish pixel per inch of 160 on the smaller device, and an underwhelming 132 on the larger. Hmm. Fonts can seem uncrisp, photos don’t really sparkle. But as was the theme of the whole device, what seemed at first like a dealbreaker turned out to be less and less important to how we felt. Yes, the screen lacks the wow factor of the AMOLED beasts, but actually it’s not bad. It has good viewing angles, the colors are vivid, blacks are satisfying. It’s certainly more than good enough for most uses of a tablet PC – and if you want a premium screen you’re likely going to have to shell out a few hundred more dollars.

Samsung decided to move away from the previous 16:10 ratio and have given these models a 4:3 aspect, just like on Apple devices. It improves the web browsing experience and certainly makes the Tab As easier to hold.

The heart of both tablets is a quad-core Qualcomm Snapdragon 410 processor pulsing at 1.2 GHz. That’s supported by an Adreno 306 GPU for graphics work and 1.5 GB of RAM. On paper, decent specs, but from time to time things feel a little sluggish. Having fewer pixels to manage helps the system fare well on standard processes, so it’s fine for Angry Birds but there may be some apps that it has a hard time running. Actually, it handled gaming quite well with little lag.

Scores on benchmarking tests place these tablets firmly in mid-table.

One selling point for these tablets is the battery life. The 8 has a 4,200 mAh battery while its big brother has 6,000 mAh. After a day of real-world use of the 9.7 model, we found it still had more than half the battery left. When we dipped into it now and then to check emails or watch short Youtube videos, it kept a charge for over 4 days.

As with most tablets, the cameras are tolerable but won’t be the device of choice for budding Peter Parkers. In ideal conditions you’ll get some decent snaps. That’s about the best we can say.

One of the more attractive parts of the Tab A deal is the software you get included. Starting with Android 5.0.2 Lollipop and, inevitably, Samsung’s own TouchWiz interface, you then get some nice freebies. Microsoft Office is pre-installed, there’s 100GB of cloud storage (free for 2 years), magazine subscriptions, a free Kindle book every month for twelve months, 3 free Audible audiobooks, and a subscription to Sirius radio for 3 months. Not bad! The downside is that among all the nice bits there is some bloatware, and – criminally – some of it can’t be uninstalled. Be careful you don’t turn into Apple, there, Samsung!

Although the low-resolution screens will be a deal-breaker for many, sleek, solid design, generous software bundle, and fantastic battery life help make the Samsung Galaxy Tab A 8.0 and Samsung Galaxy Tab A 9.7 a healthy general-use Android tablet. Here’s a second opinion: