The Samsung Galaxy Tab A tablet seems to have been overshadowed by the release of its big brother, the Galaxy Tab S4. However, the Tab A still features a large 10.5-inch display and similar four speaker setup, but at a price much closer to the entry level iPad.

In these days of declining tablet sales, has Samsung done enough with the Galaxy Tab A to have a winning tablet on its hands? 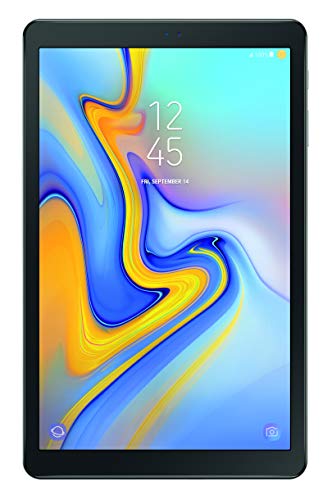 With a 10.5-inch display, this is certainly a larger tablet than many of its competitors, including the entry-level iPad. Fortunately, a soft-touch rubber back makes it easy to grip, more so than the Gorilla Glass back of the S4. With a matte finish, however, the back can show greasy fingerprint marks easily and soon get sticky.

The overall design is pretty sleek and attractive. The back takes a minimalist approach, with just a single camera, flash and Samsung logo adorning it.

The usual array of volume and power buttons, along with four new POGO connectors, are found around the outside edges. The LTE version also includes a Nano SIM slot combined with the MicroSD card reader.

Samsung is known for its quality displays, but seems to have dropped the ball with this tablet. It’s not a bad display, it just isn’t as impressive as other Samsung tablets and smartphones, having dropped the Super AMOLED.

A 1920 x 1200 resolution is fine for watching HD movies, but the lower pixel density of only 216 ppi can make text seem less crisp. The use of a TFT panel instead of IPS is a surprising choice, with pixelation and motion blur when scrolling being more evident.

Although the colors are vivid and the brightness is adequate, it comes nowhere close to Super AMOLED or the display of the iPad.

Sound is one area where the Samsung beats many of its rivals, with four speakers placed at the top and bottom corners. Although they haven’t been tuned by AKG like the S4, they do offer a high level of stereo separation, especially in Dolby ATMOS mode.

The speakers are louder than most, and certainly enough for an immersive sound when watching movies or listening to music at home.

Looking at the specs of the new Tab A 10.5, you have probably noticed that it uses the older Snapdragon 450 CPU, with only 3GB of RAM. For a 2016 tablet that would be fine, and although it’s pretty quick, apps can seem sluggish in comparison to today’s phones and tablets.

It doesn’t support the S Pen either, so if you are looking to make hand-written notes or doodles you will be disappointed.

Samsung seems to have designed this tablet as a family-friendly entertainment system, rather than a productivity tool. This is evident by the inclusion of a Kids mode, so that parents can know their children are safely surfing the web and only watching content more suitable for them.

Using Android 8.1 Oreo, it doesn’t support DeX but it does include Bixby Vision, Samsung’s version of a Google Assistant–when it finally arrives!

The impressive 7300 mAh battery outshines many of the other tablets in this class, with an estimated 16 hours of playback. If the battery should run out, it’s quick to charge to full capacity, with an optional dock providing a constant charge at home. The dock also provides a daily board mode, which displays photos, news and weather, when docked.

Should You Buy the New Samsung Galaxy Tab A 10.5?

If you’re looking for an entry-level to a mid-range Android tablet, there’s not too much competition. This isn’t so much a bad tablet, it’s just that there aren’t too many things you are going to love about it.

The battery life is impressive, and the display seems good when first watching videos or other HD content.

However, this is a cut-down version of the S4, and sometimes it seems Samsung has cut too much. The clarity of the screen isn’t helped by the choice of a TFT display, rather than OLED or IPS. The older Snapdragon processor seems dated and the accompanying graphics chipset will struggle with more complex, newer games.

Multimedia is where this tablet shines. If you are in the market for a reasonably priced Android tablet with 16:9 HD display and impressive Dolby ATMOS sound, the Galaxy Tab A is an ideal choice for you and your family.

On the other hand, if you can live within the restrictive Apple ecosystem, the new 2018 entry-level iPad can often be cheaper, with the bonus of Apple Pencil support.