Samsung is one of the best-known companies within the tablet industry and they have released a considerably large number of devices onto the market. Their tablets usually have a few common characteristics – for better or for worse, but what stands out about Samsung is the variety of choices that they offer. The Galaxy Tab A 10.1 is perhaps a sign of their effort to compete with budget-friendly Chinese tablets. This is a cheap device that offers much more than you’d expect.

The Galaxy Tab A 10.1 looks fresh and modern. It does not really stand out visually – it looks pretty much like most Samsung tablets, but it is available in four colors: black, white, smoky blue and smoky titanium. It’s always nice to have options.

Even though the device is cheap, it certainly does not look that way. Stylish design and overall sturdiness are there, but the device is entirely made out of plastic. This is expected – some compromises have to be made to keep the price low, but the Galaxy Tab 10.1 does feel good in the hand, mostly because the back of it is subtly rubberized, making the device easier to hold and grip.

With the dimensions of 6.1 x 10.1 x 0.3 inches, this is a large, therefore not too portable tablet. However, considering the size, this is a fairly light tablet, weighing only 1.1 lbs. This may not be enough to make it highly portable, but it definitely makes holding the device for longer periods of time a lot easier.

One of the best things about the Galaxy Tab 10.1 is the battery life – the battery can last up to 15 hours, if you’re not using it for gaming or similarly demanding activity. When it comes to battery life, the Tab 10.1 beats most tablets out there, even those that cost up to 3 or 4 times more.

Located on the right side of the device are a Nano-SIM and a microSD card slot, while the microphone, the Micro-USB and the headphone jack are conveniently placed on the top of the tablet. This is a nice selection of ports that should certainly satisfy the casual user.

Overall, the Galaxy Tab 10.1 is an accomplished model, that doesn’t have any major flaws when it comes to design and build quality. On the contrary – it looks better, feels better and is more convenient than some tablets that costs twice as much.

The 10.1-inch TFT display with a resolution of 1920 x 1200 pixels (pixel density: 224 pixels per inch) is perhaps one of the best things about the device. It is vivid and beautiful and definitely much better than the predecessor’s (Tab A 9.7) underwhelming display. The best thing about it is the brightness – there are built in brightness sensors which appropriate the level of brightness, depending on the ambient light.

Most of the time, cameras are only worthy of a brief mention, but that is not the case with the Tab A 10.1. The main 8 MP camera produces high quality photos (3264 x 2448 pixels), while the 2 MP, naturally, doesn’t live up to the main camera’s performance. Still, it’s always great to have two cameras and that’s pretty much a must these days with most mobile devices. However, even though the cameras have a lot of potential, they unfortunately don’t produce high quality photos. Colors are simply too vivid, so the pictures tend to look a little artificial.

In a sentence: great idea, lacklustre execution. Still, the cameras might be an exciting feature for the casual user, but not for the avid photographer.

Equipped with Android 6.0 and an Exynos octa core processor, the Galaxy Tab 10.1 performs much better than expected – it’s fast, smooth and runs well. The only downside is the included bloatware. Not only does it consume quite a bit of memory it cannot be uninstalled – it can only be deactivated.

Bloatware is, sadly, something we have gotten used to with Samsung, but all the pre-installed apps stop the device from realizing its full potential, performance-wise. Only about 10.5 GB (of 16 GB) of memory are available to the user, which isn’t much by any means, but micro SD car slot makes up for that to an extent. The tablet can handle micro SD cards of up to 200 GB of memory, which is the maximum micro SD capacity currently available.

The Galaxy Tab A 10.1 is a gamer’s tablet. The device offers decent performance even at the maximum resolution and with high details. Most demanding games are highly playable too. Gamers might be disappointed by the speakers though. Located on the of the bottom of the tablet they can produce up to 89.4 decibels of audio. Bass is completely lacking and listening to music or watching movies on this device does seem like a bit of a let-down, especially when the device is in landscape mode, which makes the come from only one side. Fortunately, headphones improve the sound drastically.

Rarely do we see such a well-executed combination of good design, powerful performance and low price. Samsung have hit the nail on the head with the Tab A 10.1. This tablet has just about everything most of us need and even overdelivers in most departments, especially considering the competitive price. Definitely great value for the money. Overall, a great tablet that outperforms much more expensive devices in a lot of aspects, with battery life being its strongest feature. 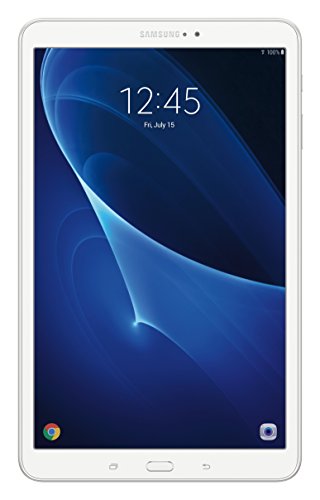