Samsung has been busy churning out tablet after tablet for some time now, hoping to strike on a few winners from its ever-expanding catalog. It’s been a reasonably successful tactic, and Samsung tablets have been gaining traction as light, affordable options for budget shoppers.

The Galaxy Tab 3 Lite 7.0, a modestly updated remake of the original 7-inch Galaxy Tab 3, is the latest development in that philosophy, but is it different enough to warrant consideration? 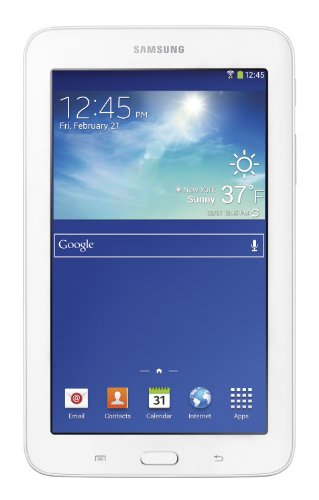 As it bears the “Lite” moniker, one would expect the Galaxy Tab 3 Lite to be notably pared down from its predecessor. In a tablet comparison, that turns out to be only partially true. At 7.6-by-4.58-by-0.38 inches and 0.68 pounds, the Tab 3 Lite is fractionally thinner than its 0.39-inch thick sibling.

Strangely, however, it’s actually 0.21 inches wider, 0.2 inches taller and ever-so-slightly heavier than the original Tab 3. It’s still quite comfortable to hold thanks to its light weight and textured backing, but the downsizing here turns out to be pretty insignificant.

Touring around the Galaxy Tab 3 Lite, the volume rocker and power button are situated on the upper right side in portrait mode. The left edge is home to a covered microSD card slot. The top sports a micro-USB socket and a standard 3.5-millimeter headphone jack, while the bottom is home to a pinhole microphone.

A physical home button is centered on the bottom bezel, along with capacitive back and menu buttons. There’s a 2-megapixel camera and a single speaker grille on the back panel. The options are quite lacking compared to tablets in a higher price range, but that’s to be expected.

The Samsung Galaxy Tab 3 was held back by a low-quality display. Comparing tablets, the Tab 3 Lite’s 7-inch panel is even worse. The display remains a paltry 1,024-by-600 pixels, which produces a decidedly fuzzy image despite the small screen size.

The contrast is very poor, which produces a drab, washed-out picture on anything other than low brightness. Color reproduction is marginally better, but that’s countered with poor viewing angles. It’s unfair to expect a premium display for a budget price, but there’s not much to like here.

With a dual-core 1.2-gigahertz Cortex-A9 processor and just one gigabyte of RAM powering it, the Galaxy Tab 3 Lite 7.0 is substantially underpowered in comparison to tablets like the Google Nexus 7 and ASUS MeMO Pad HD 7. Many apps launch slowly, and lag is a common companion.

The Cortex-A9 chip can at least handle web browsing, streaming video and other basic tasks competently, but users shouldn’t expect much more than that.

One thing the Galaxy Tab 3 Lite has working in its favor is its comfort. It’s considerably thinner than the bulky ASUS MeMO Pad HD 7, and it feels more well-balanced than the taller Nexus 7.2. That’s about the best that can be said about the Tab 3 Lite, however, as both competitors come out as winners in a tablet comparison.

The MeMO Pad boasts an improved display and more horsepower for a similar price, making it an option worth considering. The Nexus 7, meanwhile, offers a superlative display and considerably more capable hardware without breaking the bank.

Feedback on the Galaxy Tab 3 Lite 7.0 is mixed, and generally comes down to consumer expectations. Many consumers appreciate the affordable price and the solid design, and most entry-level users are accepting of the subpar display and basic hardware.

However, other users have lamented the fact that the Tab 3 Lite is inferior in several ways to its predecessor, and it fails to compare with some other devices in a similar price range.