Although tablets continue to rise in popularity, one limitation they face compared to full-sized laptops or desktops is the comparatively small display size. Samsung has attempted to remedy this with the gigantic Galaxy Note Pro 12.2, which features considerably more screen real estate than any other Samsung tablets.

The result isn’t perfect, but it certainly is intriguing. 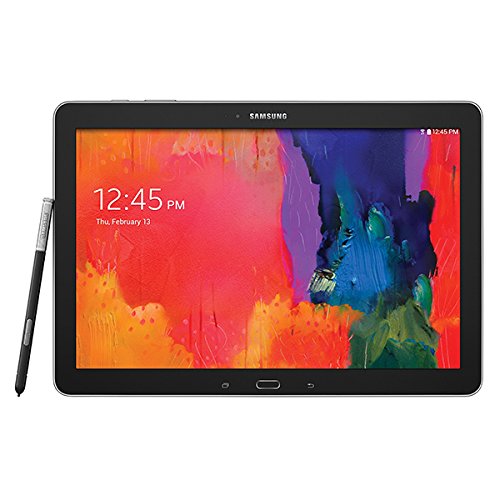 As you might expect, the Samsung Galaxy Note Pro 12.2

feels enormous compared to tablets in the eight-inch or even ten-inch form factor. The 11.64-by-8.03-by-0.32 inch frame feels awkward initially, but after an adjustment period it’s quite manageable.

It’s quite hefty at 1.65 pounds, but that figure isn’t unreasonable considering the size. It looks quite like the Galaxy Note 10.1 2014 Edition in appearance, with the hate-it-or-love-it faux-leather and stitched design again adorning the back panel. The construction quality is solid, with a metal frame underneath all the plastic to reduce flex.

The top edge of the Galaxy Note 12.2 sports a volume rocker, power button and IR blaster. The right edge features the S-Pen on top, along with a speaker grille, USB 3.0 port, covered microSD slot and covered SIM card slot.

The left edge is home to a standard 3.5-millimeter headphone jack and another speaker grille. The bottom is bare, which is somewhat surprising. Compared to tablets like the ASUS Transformer Pad TF701, the lack of an attachable keyboard dock is a bit of a disappointment.

Compared to the previous 10.1-inch iteration of the Galaxy Note, the Note 12.2’s 2,560-by-1,600 pixel display is slightly disappointing. That’s not to say that the display is poor, but it’s not the brilliant screen that it could have been.

The PenTile display technology used here reduces the sharpness considerably more than the pixel count would suggest, and the viewing angles are rather poor compared to tablets like the Transformer Pad TF701. The brightness is superb, but even that is partially countered by the high-gloss panel that produces far too many reflections.

The Galaxy Note Pro 12.2 is powered by the same 1.9-gigahertz Exynos 5420 processor and three gigabytes of RAM found in the Galaxy Note 10.1 2014 Edition, which isn’t necessarily a bad thing. Though the Note 10.1 was plagued by software-related performance issues, most of those seem to have been solved for the Note Pro 12.2.

There is still a bit of stuttering on occasion, but the performance is generally smooth. The LTE version of the Note 12.2 sports a slightly more powerful 2.3-gigahertz quad-core Snapdragon 800 chip, but the difference in performance is fairly minimal in a head-to-head tablet comparison.

The Galaxy Note Pro 12.2 is a promising idea, but it doesn’t always translate in practice. The extra-large display is very handy for productivity and for writing, drawing or painting. The stellar S Pen integration is also useful in this regard.

However, its productivity potential is hurt by the fact that it can’t be transformed into a legitimate laptop like the Transformer Pad TF701. The display is also less than ideal. There is likely a narrow market of consumers who really need the additional features the Note 12.2 provides, but others may want to consider whether the Note 10.1 may suffice for a more reasonable price.

There aren’t many important differences in a tablet comparison, which makes it hard to see the benefit of the Note 12.2 for the average user.

Customer feedback seems to depend largely on the user. Those who use the Galaxy Note Pro 12.2 for artistic endeavors roundly praise the S Pen functionality and the added screen space.

The new Magazine UX interface is also frequently praised, though it isn’t without its issues. Perhaps the most common complaint is that, despite being heralded as such, the Galaxy 12.2 is not a legitimate laptop replacement.

The size is also a problem for some, though others have found it easily manageable.