The RCA Viking Pro is a 10.1″ hybrid 2-in-1 tablet (i.e. it comes with a detachable keyboard) that is one of the best cheap tablets on the market. It would seem to be pitched as a slightly more expensive Kindle Fire competitor, with better specs and running pure Android. How does it measure up? 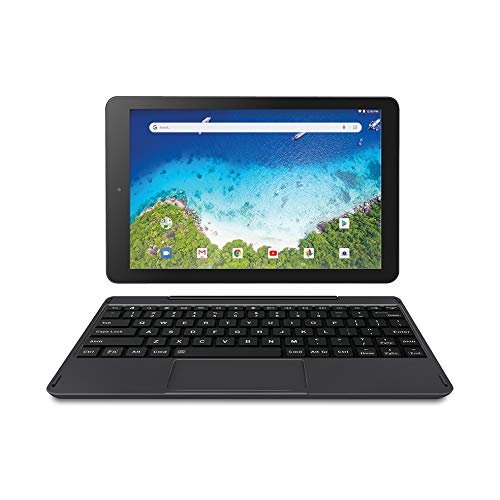 It runs Android 5.0 Lollipop. You get 24GB of free storage out of the box, but can delete some of the pre-installed apps if you want to free up space.

Its quad-core MT8127 processor runs at 1.3 GHz, backed by 1GB of RAM. Performance is fine – most apps run smoothly, but it’s not a device for multitasking. For best results you’ll need to close apps you aren’t using. Still, it’s quite fast for the price.

The tablet and keyboard are made from rigid plastic – cheap, but not the kind of plastic that attracts smudgy fingerprints. (It’s seriously unbelievable to me that some manufacturers still make glossy tablets and phones that get so full of fingerprints they end up looking like an ink-pad in a police station.)

Both tablet and keyboard have a thickness of 9.6mm. That makes it very portable, but it’s heavy enough that holding it in one hand for some time starts to be a drag. You’ll end up switching hands a lot, or changing to portrait mode where it can rest more on your palm and ease the strain.

A reset button can be found on the back, along with a micro-SD slot that allows expansion of up to 128GB. Volume control and headphone jack are placed a little awkwardly. There’s a micro-USB port and a handy micro-HDMI slot.

The 2-in-1 features work well – the keyboard is attached by magnets, and it’s possible to detach it and use the tablet in various form factors – display mode or tent mode are good for watching movies, while tablet mode turns the device into a somewhat bulky slate.

At 10.1 inches, you get a lot of real estate for your money. The resolution is a slightly disappointing 1280 x 800 – a mere 149 pixels per inch. It’s far from the glorious high-end Samsung models, but guess what? You don’t get a premium screen on a device this large and this cheap. It’s more than capable of running videos in HD and for most purposes, the screen looks fine.

The keyboard is surprisingly good – it’s compact but yet has SEVENTEEN shortcut keys. Some quality sacrifices were made to get it into the right price bracket, but you’ll definitely use it instead of the on-screen keyboard.

The trackpad is good and has some limited but useful multi-touch gesture abilities. You just have to be careful not to touch the trackpad while typing on the keyboard – pressing it by accident is a nuisance.

Adding a wireless mouse is an option, but by default a right-click acts as ‘back’ – which drives me crazy because I’ll never get used to anything other than the traditional Windows interpretation of a right-click. Never!

Both front and back cameras come at the bottom of the scale. I’d rate the front camera 1 out of 10 and the 2MP rear camera 2 out of 10. You might use it in an emergency – for example, if your cat is doing something hilarious RIGHT NOW and you have no time to get grab your smartphone or DLSR camera.

But otherwise, you should tape them up and pretend they aren’t there.

We don’t normally give speakers their own section – audiophiles typically know which products have the best sound, and we only mention them if they are seriously good or seriously bad. Guess which you get on a ten-inch tablet that costs a hundred bucks? Clue – not the good ones.

The tablet has Bluetooth, so you’ll want to set it up with a wireless speaker.

Battery life isn’t too bad – after about 5 hours you’ll get a notice saying there’s 20{cc9a9509f9495fc077e13985dc9e33dda9630fd6d1a92c3cf67be84f810d7dd4} battery left, with the option of turning the brightness etc down to squeeze more life out of it. It takes about 3 hours to charge back to full capacity. It consumes almost no battery in standby mode, which is great.

A quick glance through the customer reviews on Amazon suggest that most buyers are happy with this tablet – most complaints were about delivery etc, not about the device itself. It’s currently only available in the USA.