If you are planning to invest in a new tablet, here is a review of the latest offer from Lenovo – the Yoga Tab 3 Pro – for your consideration.

The Lenovo Yoga Tab 3 Pro is an all-in-one tablet built without any compromise. While some popular tablets like the Nexus 9 and iPad Air 2 were designed with portability as an important consideration, this new device from Lenovo was designed taking into consideration the requirements of the Netflix generation.

The manufacturer has focused on hardware tricks – some might say gimmicks: unique features like a built-in projector and a cylindrical stand. 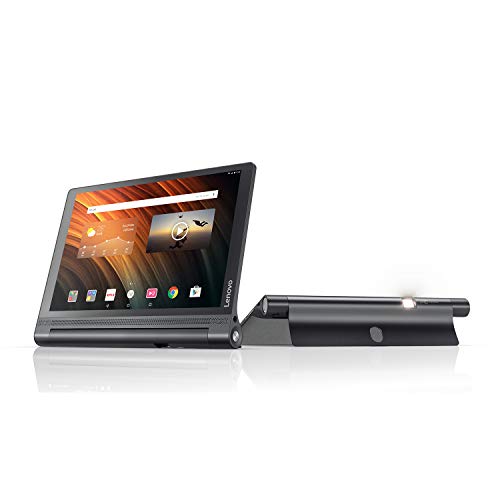 Lenovo claims their 10,200 mAh battery will give up to 18 hours of use, way longer than most tablets.

In 2014, Lenovo introduced their Yoga Tab 2 Pro and this new Tab 3 Pro has similar design aspects as its predecessor. The design is contentious – it will be loved by some, while others won’t be able to stand it. But most people who have reviewed it, including me, find it attractive, quirky, and charming.

The intelligently-designed stand pops up when the user presses a button on the rear side of the tablet. This particular stand lets the user turn the tablet to a variety of angles. There is also a hook from which the unit can hand. Why? To beam movies from the built-in projector.

You might be surprised to know that the Lenovo Yoga Tab 3 Pro comes with a projector, such that you can view video or photos on a larger screen or wall. The projector can be activated just by holding down the ‘project’ button that can be found on the cylinder stand.

This projector lets the user view images up to a size of 70 inches. This is the unit’s unique selling point, and it’s as relevant for hipsters who want to hate watch their least favorite show as it is for the head of Marketing who wants to show his 80-slide Powerpoint presentation.

This tab runs the Android Operating System. Specifically, Google’s previous generation Android 5.1 Lollipop. As compared to the predecessor, Lenovo has made some necessary changes to the user interface.

For instance, they have replaced their Android App’s native shortcut icons with Lenovo’s own icons. It is expected that Lenovo will shortly introduce the upgrading to Android 6.0 Marshmallow operating system.

To ensure easy multitasking, the tablet comes with Lenovo’s Smart Window 2.0 and this feature allows users to run two applications inside Windows on top of the background application. This feature will make the users productive as they can complete many tasks side-by-side, without the requirement of switching between applications.

Lenovo’s AnyPen feature will be of great help to users who will have to mark up documents, take notes and those who will have to sign contracts. With this technology, any metal object can be quickly converted into a pen and the tablet will understand it immediately.

To conclude, with its entertainment and productivity features and interesting design, the Lenovo Yoga Tab 3 Pro is a marmite tablet – you’ll love it to bits or utterly hate it. Me? I thought it was great fun. No, you can’t have it back!