In December 2016, Qualcomm announced Windows support was coming to their Snapdragon range of ARM processors. The Lenovo Mixx 630 is one of the first laptop hybrids to feature an ARM processor with Windows 10.

Is a chipset used in the top end mobile phones of 2017 really good enough to run Windows 10? 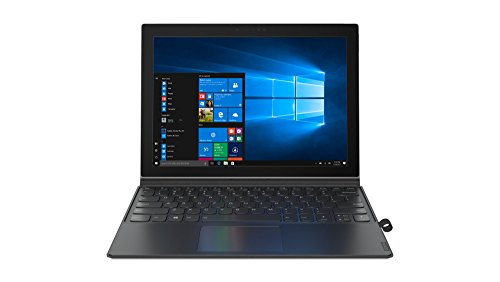 When you first look at the Lenovo Miix 630, it seems to feature pretty much the same design as most other 2-in-1 hybrids. An insanely thin tablet, at just 0.29 inches, is made possible by the ARM chipset, which doesn’t require any thermal designs or fans needed by Intel chips.

With the whole package weighing just over 3 pounds, it’s definitely lighter than most other ultrabooks. Portability is a big factor in this laptop replacement, with two of the main selling points of ARM chips being the always-connected LTE and a longer battery life.

Being so slim, this device doesn’t carry a huge array of ports. There’s only one USB3.1 type-C port, which can be used for power and connecting external displays. With no USB type-A ports, you’re going to need to invest in a hub for more accessories.

The front of the tablet is dominated by a visually stunning, Gorilla Glass covered, 12.2-inch IPS LCD display. The 3:2 aspect-ratio makes more sense for a laptop/tablet combo like this, but isn’t as suited to playing movies as a 16:10 ratio.

The FHD+ display features a 1920 x 1280 with a pixel density of 188PPI, which seems fine for a screen of this size. The display is both crisp and fairly bright, but it can’t match the iPad Pro or PixelSense displays of the Microsoft Surface Pro.

However, remember you are paying much less for the whole package with this tablet/laptop combo. The only problem is the display can be a bit too glossy and reflective, especially when used outdoors in brighter conditions.

A large bezel around the display looks outdated and makes you wonder whether Lenovo could have fitted more screen space in. The bezel does have its uses though, housing the infrared Windows Hello camera at the top and magnets at the bottom, for attaching the keyboard.

A full-size, backlit keyboard also doubles up as a cover for the tablet, and is finished with an appealing black fabric. As you would expect from Lenovo, the keyboard has a nice feel to it, with a decent level of travel not often found on cover-style keyboards.

The kickstand for the Miix is also built into the keyboard cover rather than attached to the back of the tablet.

On the right-hand edge of the keyboard, a small strap is used to attach the Lenovo pen. It won’t compete with the more serious precision stylii of the iPad or Surface, but it’s ideal for doodling or taking notes—and it’s INCLUDED; Microsoft please take note.

The biggest draw of the Miix for customers is that ARM architecture offered by the Snapdragon 835 chipset. It delivers a few big benefits over Intel chips, but also has its fair share of downsides too.

For a flagship phone, the powerful Snapdragon 835 makes for a smooth performance, but it’s a different matter when it comes to running Windows 10.

Out of the box, the Miix 630 uses Windows 10 S, a cutdown version of Windows, but you can upgrade to Windows 10 Pro after activation. The question is, would you want to? Even running apps from the Windows app store designed for ARM seemed pretty laggy and there’s no ARM support for 64-bit apps yet.

Productivity apps like Photoshop Elements won’t download, because they are x64-only, and the integrated graphics aren’t as good as Intel UHD graphics. Apps that do work include Office apps, some mobile games, and entertainment apps.

Playing mobile games like Asphalt 8 is fine, just don’t expect this to be a gaming laptop—watching movies on Netflix or TV shows on Hulu should be no problem either.

ARM does have it’s good points, though, in an impressively long battery life and the always-connected LTE. A Snapdragon X16 cellular modem is actually embedded into the 835 chipset, so in theory, you could achieve 1Gbps speeds at download.

Intel PCs with always-on LTE tend to come at a premium—the Miix even comes with a built-in e-SIM and the first month of data free.

Extra long battery life makes full use of the laptop standard 48Wh battery and efficient octa-core of the Snapdragon 835. Using four cores for power-hungry tasks and four less powerful cores for less demanding tasks extends the battery life to up to 20 hours.

You don’t have to worry too much about powering down, as the Snapdragon 835 is more power efficient in standby mode—it’s basically sipping power.

If you are looking for an alternative to the Microsoft Surface Pro, the Miix 630 includes everything you need in the box at a lower price. With the recent release of the new Surface Go and more powerful iPad Pro models, you will often find this Lenovo hybrid at reduced prices.

It offers a more complete laptop experience than Android or iOS but the Snapdragon 835 isn’t as comfortable with Windows as Intel chips used by Microsoft.

The extended battery life and always on LTE capability are hard to beat at this price.

Unfortunately, the older Snapdragon 835 chip limits which productivity tasks you can achieve. The newer Snapdragon 850 chip was recently launched, This runs at 30 percent faster and hopefully will support 64-bit apps too.

Windows 10 on ARM architecture is something many people are excited about— it just may not be time yet to make the jump. It might be better to wait for that newer processor and more app compatibility, especially 64-bit apps, before giving a device like this a go.