Alldocube is one of the latest Chinese manufacturers to join forces with our favorite online retailers for a US presence. There’s been quite a lot of negativity concerning Chinese tablets, but most of our Apple or Samsung products are actually made in the Far East.

One thing the Chinese brands do offer is extraordinary value for money. If you relish the idea of a Windows tablet but also don’t want to dump Android just yet, the iwork10 offers both, in a wallet-friendly package. 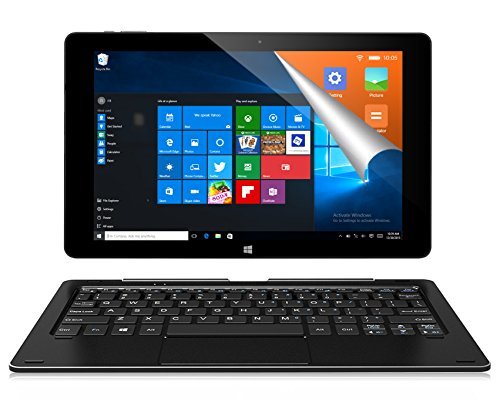 It’s certainly a great concept, but can the Alldocube iWork 10 deliver at such a low price?

The iWork 10 is basically a Windows tablet with a detachable keyboard. The sleek main chassis uses a metal, aluminum alloy, back cover, made with a fine cutting technology.

For a budget Chinese tablet, it’s surprisingly smooth and sturdy—it doesn’t creak like others.

The tablet, at 0.35 inches thick, is easy to hold, although slightly heavy at over 1.5 pounds. Attach the keyboard and that weight shoots up to over 2.5 pounds, but that’s not too bad for a laptop hybrid.

The optional keyboard dock features a polycarbonate base with rubber feet and a metal top plate for that premium feel. A magnetic hinge on the keyboard can be pretty stiff, but holds the tablet firmly in as you alternate between stand, tent, laptop or tablet mode.

Being a 10.1-inch tablet, the keyboard may be smaller than you’re used to, but it has an excellent build quality with good key travel. The trackpad is pretty small, yet still useable and not overly sensitive, which can often be a problem on such small keyboards.

The keyboard doesn’t feature any extra battery capacity, but makes it up for it with two extra USB 2 ports.

The front of the tablet is dominated by a large Full HD, 10.1-inch IPS display. The 1920 x 1200 pixel resolution allows for vivid colors with a solid brightness at wider viewing angles. At over 300 nits of brightness, it even matches the levels of more premium tablets, like the iPad, and can be seen in sunlight too.

The speakers are the main let down of this tablet, and both are located on the right-hand side of the tablet when in landscape mode. There’s no stereo separation and sound quality is generally quite poor, with very little bass.

In addition to those stereo speakers, you’ll find most of the ports you need for connectivity around the outer edge of the tablet. There’s a micro USB 2.0, and USB-Type C for charging.

Oddly enough, the included OTG USB cable only supports USB 2, with the type-C port struggling to communicate with any USB 3 devices larger than a flash stick.

A micro HDMI port is capable of 4K video output at a reasonable 30 Hz frame rate. There’s a microSD card slot for expanding the memory but, unfortunately, there’s no 3G or 4G support, unless you use a dongle.

There are two cameras, but at 2.0MP they’re pretty average and not much use, other than for the occasional Skype call.

Wi-Fi is provided, but with no ac support and only a single band. Bluetooth 4.1 allows for connecting external speaker or headphones—essential with those below-par speakers on board.

Performance as a Windows Laptop

It may sound like we’re only pointing out the limitations, but when it comes to what matters, this tablet has a pretty decent performance. The Quad core Intel Cherry Trail CPU and 4GB of RAM provide just enough power to run Windows 10.

For productivity tasks like Office apps or streaming a film in Netflix, everything runs with no major issues. Microsoft Edge provides a faster web browsing experience, alongside Cortana, Microsoft’s virtual assistant. You can even use Windows Ink if you buy the optional stylus, with 256 levels of sensitivity.

The entry-level processor does have its limits though, with multitasking being noticeably slow and laggy. Despite the inclusion of Intel HD Graphics Gen8, it’s not really suitable for anything but the lightest gaming.

Life as an Android Tablet

For the occasional game or a smoother performance, switch over to Android, it only takes a minute or so. While it is only an okay Windows laptop, it’s a great Android tablet, despite only running Android 5.1.

A stock version of Android, it comes with very little bloatware installed unlike many of its Chinese siblings. Models sold in the States now include the Google Play store too, available as an over the air update.

Gaming is smooth and fast on the Android side, although you may need to turn down the graphics settings of some modern games. There’s very little lag at lower settings, but the sound is still awful when played through the internal speakers.

The included battery of 7500 mAh may seem large at first, but for a tablet with a 10.1-inch screen and Full HD can be quite limiting. The manufacturer states an estimated battery life of 6 hours and 42 minutes but this can vary, depending on the usage.

Should You Buy It?

As a second machine, the Alldocube offers a compact and highly portable productivity device. For a journalist or student, it’s an ideal machine for typing up those articles or documents while on the go. You could even use the Android tablet for a spot of mobile gaming, or watching a movie between tasks.

As a first use machine, the older technology in this tablet makes it not such a good choice. The lack of USB 3 means transferring files can take much longer, and the slower processor isn’t too good for multitasking.

For the money, though, this dual boot tablet offers exceptional potential. I personally, would love one of these as my second machine for use on the road.