One look at the Acer Predator 8 and you know it’s a “gamer” tablet. It’s the latest in Acer’s Predator line-up, designed with the hardcore gamer in mind. One thing’s for sure, this tablet is not for the average Candy Crush-playing mom.

Acer touts the tablet’s gamer-optimized features such as haptic feedback, its beautiful display, and the powerful audio. It also features a rugged and striking red-and-black design that just screams to be noticed. It’s a somewhat polarizing design, but it definitely doesn’t pretend to be plain.

The 8-inch tablet comes with a mostly plastic housing that also features a polished metal back to hold it comfortably. True to their claims of powerful audio, Acer has packed four separate speakers in all four corners of the tablet, providing sound that can be heard halfway across the room. 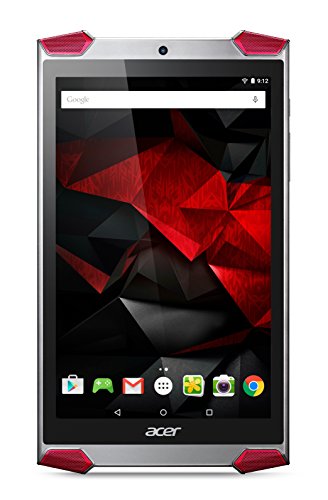 If you love the rumble mechanic on consoles, then you’ll also fall for the vibrating feedback on the Predator 8. Vibrations can be triggered by explosions inside a game, or when you’ve touched on potential clues or special items.

Playing games on the Predator 8 is a visual feast, with a 1920 x 1080 pixel display that shows full and vibrant color. It provides a completely immersive experience together with the haptic feedback and audio.

However, while Acer has focused its marketing on these aspects, it seems to have ignored one of the most important factors for gamers: performance. The Predator 8 is a direct competitor to Nvidia’s Shield gaming tablet, and one can’t help but make comparisons between the two.

While the Predator 8 is the flashier one of the two, its performance tells a different story. The Predator 8’s quad-core Intel Atom processor lacks the power and punch that Nvidia’s Shield provides with its quad-core Tegra K1 processor. Shipping with only 2GB of RAM doesn’t help, either, when most smartphones these days come with 3GB at minimum.

Despite these, though, the Predator 8 will handle most, if not all, games very easily. Performance differences between the two tablets will not be very noticeable to all but the most hardcore benchmarking gamers out there.

The tablet comes preloaded with Android Lollipop with a distinctly Acer flavor, care of its many pre-installed apps. The Predator 8 has a long list of pre-installed software that you probably won’t need and just takes up space in the tablet. Fortunately, you can easily uninstall any of these bloatware if you want to.

The good news is that some of these apps are pretty useful. The EZ suite’s Tasking multitasking tool, for example, lets you manage multiple running apps side by side easily. Other apps in the suite make use of gestures to capture screenshots or wake up the device and open a specific app.

Another little annoyance is that when you first start up the tablet, you’ll be greeted by a whole host of game and app icons that Acer thinks you’ll want to install. Unfortunately with the Predator 8, customization means having to delete all the bloatware first before you can actually start customizing with your favorite apps and configurations.

The Predator 8 comes with a lithium-polymer 4,420mAh battery that is said to last up to 8.5 hours for regular use. You can even prolong battery life by turning on battery saver, which limits Wi-Fi, Bluetooth, background app refresh, location services, and vibration.

The battery still isn’t a match for gaming, so you’ll need to have a charger nearby if you plan to play on the tablet for a prolonged period. This is especially important if you’re going to play performance-hungry games. It also charges slowly, so be prepared to play while tethered to a power outlet.

In terms of connectivity, the Predator 8 only comes with Wi-Fi. There is no cellular connectivity to speak of. Even then, the connection is usually tenuous at best. Wi-Fi connection has a few frustrating quirks, such as poor connection, or even total loss of connection despite being beside the Wi-Fi router.