Billed as the world’s first Chrome OS tablet, the Acer Chromebook 10 is primarily aimed at students. Recently, this keyboard-free Chromebook became available for anybody to purchase. Should it stay in the classroom, or is it something to take home with you? 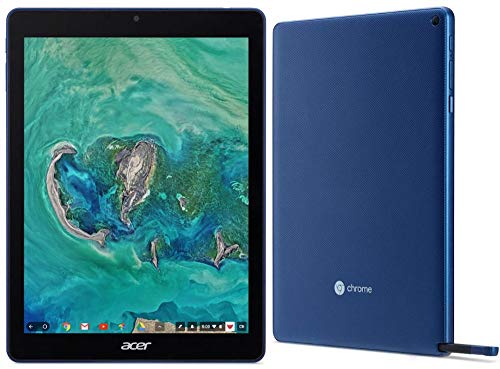 For the latest price, check Amazon.

The Acer Chromebook Tab offers a good balance of simplicity and practicality, it’s clearly designed to take the knocks often experienced in high school. An elegant, cobalt blue, rippled back makes it easier to hold one-handed.

The sides of the tablet feature all the usual array of speakers, buttons, and ports. There is actually a 3.5mm audio jack (not too common these days), alongside a USB-C port for charging and a MicroSD card slot for storage. A slot for the provided Wacom stylus is a useful addition, meaning you should never, hopefully, misplace it.

The display is actually 9.7 inches rather than the 10-inch suggested by the name but features a strong pixel density of 264, the same as the Apple retina displays. Using IPS LCD technology, the screen looks good at all angles, with tasks, like emails or browsing the web, all appearing clear and easier on the eyes.

Color and contrast are alright too, but there are limited customization options compared to Android tablets. One of the best features, especially when using the stylus, is the full lamination of the screen with no visible air gap. Comparing it with the new iPad, Apple seems to have chosen a slightly better screen, but the differences aren’t too significant.

Chrome OS—Great for Educational Institutions, Not so Much for Individual Users

Chrome OS may be the biggest selling point of this tablet, but it can also be its most frustrating feature too. IT administrators in school will love it; they can manage the Chromebook Tab 10 just as efficiently as other Chromebooks on campus.

Remote management with an education license ensures each user has their own account. The OS is updated automatically and secured regularly with Drive backups, keeping everybody’s work safe.

For personal users, it’s not so great, with Chrome OS not being optimized for touch input. The system is often unresponsive and the touch keyboard can be difficult to bring to screen quickly if you need to write or edit a document or email.

Chrome OS can be ideal if you have an additional Bluetooth keyboard with keyboard shortcuts but doesn’t quite cut the mustard as a touchscreen OS yet.

Inside the Chromebook Tab 10 is a Rockwell hexa-core RK3399 processor, certified by Google for use in Chromebooks. Although Rockwell chips don’t enjoy the best of reputations, this chipset is fast enough for most of the tasks you’ll carry out.

This Chrome OS tablet is hardly a powerhouse by today’s standards. Basically, the Chromebook Tab 10 is a decent tablet for single-app tasks but will struggle with multi-tasking, experiencing frequent stutters and shutdowns.

Where the Chromebook Tab 10 does excel is the battery life. Chrome OS is known to have a low power consumption, with the 4500 mAh battery easily exceeding the stated 9-hour battery life. For basic web surfing or multimedia playback, it will outlast it’s nearest iOS or Android-powered rivals—just don’t try gaming too much with the battery.

Gaming and the Chromebook Tab 10

You can install just about every app from the Google Play store, including Android games. Recent games, like Asphalt 10 or PUBG Mobile, will run and look okay but not as good as on other high-end tablets. If you are looking for a gaming tablet, the iPad or similar priced Android devices will offer a much better performance.

Maybe teachers don’t like too much noise in the classroom, but the speakers on this tablet offer a woeful performance. They are just about okay for watching a video at close range or listening to podcasts and online radio, but they leave a lot to be desired when listening to music.

The cameras included aren’t much better either and can be underwhelming for users. There’s no LED flash or autofocus and you can virtually forget any low-light photography.

You won’t be using the Tab 10 for too much photography, but it will just about do the job for video calling or quick snaps of something you need to remember from class.

Should You Buy the Acer Chromebook Tab 10?

It may sound like we hate Chromebook Tab 10, but it is a pretty decent tablet for students. The inclusion of Chrome OS and a stylus make this tablet more attractive for use on campus than the iPad. It’s just strange the Google Keep note-taking app doesn’t feature handwriting recognition for easier Google Docs integration.

The adoption of Chrome OS on a touchscreen device still feels slightly clumsy without a keyboard. If you are looking for a tablet solution at a similar price, the new iPad still outperforms this offering from Acer.

Google may be pushing Chrome OS as the future of Android tablets but it’s not there yet. To use an educational analogy, Chrome needs to graduate first. If you are desperate to get a Chrome OS tablet, there are better alternatives available, like the premium priced, Google Pixel Slate.