If you love the Samsung Galaxy line of tablets but prefer the Windows OS, the TabPro S is an enticing option. This 2-in-1 tablet delivers a Surface-like experience with a Samsung spin that should make mobile professionals more than happy.

Thanks to solid hardware and superb Windows integration, it could be a runaway hit with the right audience. 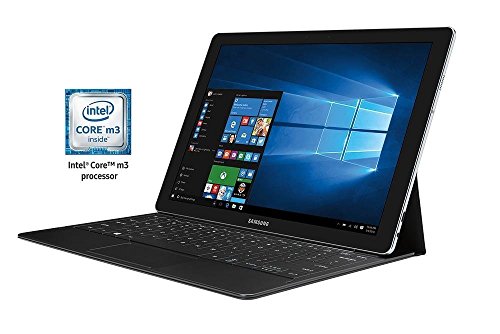 Sheathed in grippy faux-leather plastic accented with polished metal bezels, this 1.53-pound tablet makes a good impression at first glance. Its unique cover boasts a full-sized detachable keyboard with an integrated touchpad that can be adjusted to the angle of your choosing.

The TabPro S comes with either a 128GB or a 256GB SSD, 4GB of RAM and a zippy 2.2GHz Intel Core M3 CPU. The on-board battery is a robust 5200mAh model that provides plenty of juice for office work and media playback alike.

In addition, there’s a 5MP front camera as well as a 5MP rear lens with 4X digital zoom.

Unlike most Samsung tablets, the TabPro S comes pre-loaded with Windows 10 Home Edition. As you’d expect, all the usual Microsoft productivity tools like Word, Excel, Outlook and Powerpoint come along for the ride.

The well-stocked Windows Store has many more apps as well as movies and music. In addition, the TabPro S supports XBOX media streaming.

All the usual networking protocols such as Bluetooth v4.1 and Wi-Fi come standard on the TabPro S as you’d expect. Mobile broadband is also an option. As far as ports go, there’s USB C 3.1 and little else.

An optional Bluetooth stylus is available as an accessory. Galaxy phone owners can pair their handset to their tablet using NFC.

Thanks to the dual-core Intel Core M3 under the hood, the TabPro S never seems to lag under the weight of running a full Windows 10 installation. The battery delivers up to 630 minutes of operating time and can be fully recharged in less than 2.5 hours.

Capable of a 4148 score on GeekBench, the TabPro S holds its own against competing tablets.

On the upside, the TabPro S is sleek, polished, versatile and powerful. It delivers a full Windows 10 experience for the same price as the Surface Pro 4 and offers a new twist on the hybrid tablet with its novel sliding display design.

The only minor problem with the TabPro S is its less-than-stellar keyboard.

If you’re looking for a tablet hybrid that can truly double as a full-featured laptop, the Samsung TabPro S should be on your shortlist. While it’s the obvious alternative to the Microsoft Surface Pro 4, it might just lure a few iPad fans away from the Apple fold if given a chance.