When opening the Microsoft Surface Pro 7, a single, oft-quoted phrase comes to mind: what’s in a name? This deceptive looking 2-in-1 hybrid by combining both the portability of a tablet together with functionality of a laptop, a uniquely convertible device is produced.

Building off the Surface Pro 6 (which we’ve reviewed previously), while the Surface Pro 7 comes with undeniable improvements in terms of performance, connectivity, and porting, does it go far enough to justify a full-on refresh?

Check out our take on Microsoft’s new device below to find out. 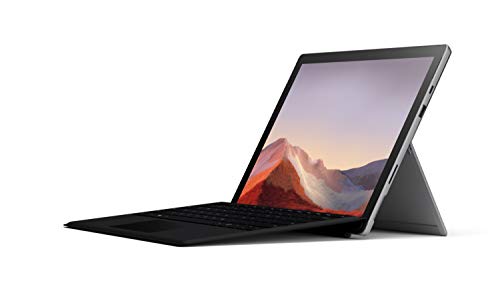 At any rate, the design is pretty faultless, it feels a bit stale when compared to its sibling product, (the more modern) Surface Pro X.

The IPS screen still comes at the familiar size of 12.3-inches with a resolution of 2736 x 1824 over a glossy display. While this has remained unchanged, make no mistake. The screen is still as stunningly vibrant, responsive and clear as the Surface Pro 6 which already rests among the top contenders in the market.

However, while we usually hold true to the saying if it ain’t broke don’t fix it, it would have been a welcome addition if Microsoft reduced the size of the thick bezels.

The biggest improvement is best observed once we turn to the internals of the Surface Pro 7. Coming equipped with 10th gen Intel Core CPUs (i3, i5 or i7) and paired with 8GB of RAM, the addition of Microsoft’s new Ice Lake Chips was well-considered. Although it doesn’t quite come close to gaming devices, it will still blaze anything involving everyday usage from surfing the web to streaming Netflix.

We’ve tested the device by opening close to a dozen tabs in Chrome and things remained crystal smooth. Light gaming also, will be more than feasible given Intel’s integrated Iris Plus. So, going for a round of Fortnite, PUBG or even Stardew Valley will be A-Okay and not out of the question.

Again, however, this is a device built for professionals dealing with spreadsheets, editing, and presentations and is not optimized for heavy gaming.

Likewise turning to its SSD, the Surface Pro 7 comes with up to 1TB of in-built memory so storage shouldn’t be an issue if you decide to install sizeable games or store hours of media.

The consequence of having more processing power is felt the most when we turn to its battery. Though both models come with 45W batteries, the difference is stark. The refresh, while it comes with an advertised 11-hours of usage, only lasts for 8-hours during our tests and other various reviews.

Conversely, if the Surface Pro 6 did one thing right, it was having a battery that had stamina, lasting close to 1.5-hours longer. This is particularly disappointing when we look at other brands such as Apple’s iPad Pro which has been reported to last up to 13-hours of constant usage.

While not quite Thunderbolt 3, the Surface Pro 7 adds on to the previous model by adding a USB-C port to the mix. However, if you’re not a fan of USB-Cs, you’ll be pleased to know that the older Type-A USB port is still present. In this regard, Microsoft has reached a fine balance between future-proofing their device and appeasing those who prefer more orthodox porting.

A quick glance to the top of the device reveals an infrared camera that comes in 8-megapixels which, frankly, isn’t something to be excited about. It does support Windows Hello if that’s your thing and it should do fine for everything like Skype calls and selfie-taking. Just don’t expect to see a mirror-like reflection from this device.

Microsoft’s Surface Pro 7 isn’t by any means a revolutionary product, but it isn’t bad by any metric. It’s definitely a step forward, just not quite an entire step – a half-step, at best. Adding the Type-C port along with the newer ‘Ice Lake’ processors is a sure sign that Microsoft’s hybrid flagship isn’t entirely neglected yet this device won’t excite any diehard tech geek.

Don’t misunderstand though – the Surface Pro 7 is a solid device that will be a fantastic upgrade if you have an older device. It’s beautiful, powerful and will definitely last for a good few years if taken care of. But, if you already have a Surface Pro 6, we’ll be frank: look elsewhere for now.