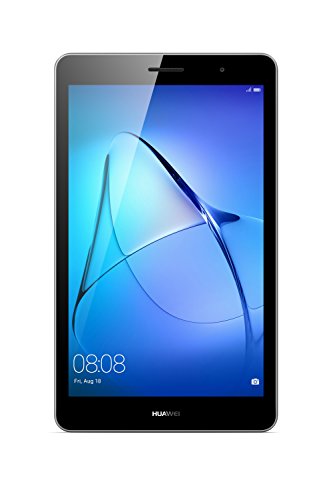 The Huawei MediaPad T3 8 has a very similar design to the MediaPad T3 10.  It still feels awesome and well constructed. The only complaint you will probably have is the switch from the plastic frame to the display. It doesn’t look like they work together perfectly. But it feels solid, even so. Huawei offers a black and white front MediaPad T3 8. There is no physical home button-only computer keys-in comparison to Samsung Galaxy Tab A. There is a Huawei icon under the screen instead of a home button. The bezels are therefore not smaller than with Samsung.

At 7.95 millimeters it’s definitely not very thin, but not too thick either. The tablet weighs 350 grams.  There is no USB Type C port, like its larger sibling. Huawei uses a standard USB microphone connector instead to load the unit. You can also use it for attaching accessories. The top includes a 3.5millimeter audio jack and a slot for the microSD card can be opened on the bottom. You can also place your SIM card there if you have the LTE version. The power button and volume controls are made of plastic above the opening.

A 2 megapixel front-facing camera is positioned next to the microphone. There is a 5-megapixel camera too, but not very strong. The Galaxy Tab A 8.0 cameras are a bit better, if you ask us.

There is a single speaker above the screen that you can hold your ear for phone calls. The LTE version can be used as a mobile. Although it is great that we have a speaker at the front, the performance is not so good. It’s probably good for some YouTube and even a few music videos. But you can’t fill a large room with the sound.

The 8-inch Huawei MediaPad T3 8 provides 1280x 800 pixel HD resolution. Sure, an HD display is far from ideal, because almost all smartphones have a higher density of pixels.

Everything else is pretty good. Hues are cool, contrast is great and the existence of too many reflections will not represent one of your concerns. It seems that the screen is actually laminated. There is no difference between the IPS display and the touchscreen, unlike the Samsungs rival. And it’s very, very small if there’s one.

The luminosity is good for working outdoors. But the Galaxy Tab A 8.0 display is much brighter.  The Qualcomm Snapdragon 425 is used inside the Huawei MediaPad T3 8 along with 2 GB of RAM and 16 GB of internal storage.  Since we get almost the same hardware with MediaPad T3 10, Lenovo Tab4 10, Tab4 8, and Samsung Galaxy Tab A 8.0, this might sound familiar to you.

The software is not quite impressive and quite similar to its competition. As you could imagine, their quality is very close. For most things like surfing the web, watching some YouTube and doing some light multitasking, MediaPad T3 8 is certainly powerful enough. When you toggle between apps quickly or have a lot of tabs open in Chrome, you may be able to see some tiny tabs. Huawei’s MediaPad T3 8 is shipped with Android 7.0 Nougat, and therefore no Oreo yet. If that ever is going to change? In the past, Huawei sometimes released updates, but not all of their tablets. Because it’s a cheaper tablet, I don’t expect a big upgrade ever.In addition to Nougat, the EMUI is running in version 5.1. This is Huawei’s own interface, which is the same as its smartphone and tablet app. You should feel right at home if you’ve ever owned a phone from them in the last few years.

I can live with Huawei’s software while I like vanilla Android. My advice is to take the settings one by one and see what you may need. Then simply uninstall all the programs that you don’t want. I replaced the Huawei keyboard, for example, with Google’s keyboard, I like it better.

Let’s have a look at the quality and capacity of the battery The MediaPad T3 10 battery was not big and the Huawei battery in the MediaPad T3 8 is the same 4800mAh. However, now we only have an 8-inch display that needs less power. And hence, the lifespan of the battery is much higher. It had a result of 13 hours in our test. We usually loop a 50 percent brightness HD video and activate WiFi. Yet battery life is also pretty good during daily use. We used it continuously for six hours and 20 minutes during that period. Seemingly during standby the tablet doesn’t lose charge. I watched most YouTube in those 6.3 hours, browsed the internet a bit and written a little in Microsoft Word. The luminosity ranged from 50% to 100% and Bluetooth and WiFi were activated all of the time.

Should you buy the Huawei MediaPad T3 8?

May I therefore suggest Huawei MediaPad T3 8? The build quality is quite good, most items have excellent performance and the life of the battery is fantastic. The 8-inch screen provides only an imperfect HD resolution. But the competition is also no better. My main criticism is that the Emotion UI is poorly modified.

Nonetheless, I still think that MediaPad T3 8 is a pretty good input tablet and yes, I do suggest that. You should also look at your rivals. The first is the almost identical hardware Lenovo Tab4 8. The Samsung Galaxy Tab A 8.0 is also a good choice. The life of the battery is great and the display is a bit lighter. Historically, Samsung’s updates have been much better too.  The main disadvantage is the cost–it is significantly more expensive in most countries than Huawei.