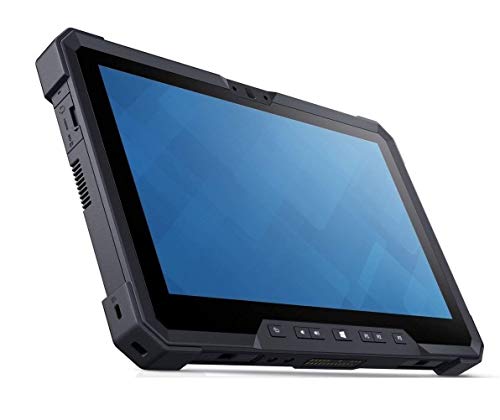 The Dell Latitude 7285’s design is impressive  due to its elegance and perfect manufacturing. Both surfaces are soft-touched and have a high-quality feeling. The unit, consisting of the actual tablet and keyboard dock, is kept in black fully The tablet on the back is only decorated with the Dell Logo. The tablet convinces in terms of stability with a very good stiffness that makes it almost impossible to twist. The Dell Latitude 7285 also shines through its solid construction in the pressure test. We noticed only a little carelessness in the keyboard dock that can be pressed in a small amount. It can however be considered normal so that there is no basis for down votes in our evaluation.

The magnetic bond between the tablet and the dock is so solid that both hands must be used to separate the two components. Unlike the similar Dell XPS 12 9250, the angle of the device can be easily adjusted.  The keyboard dock provides an extra battery as a special feature, which increases the battery life significantly.

Sharp’s 3K screen has a resolution of 2880×1920 pixels, which corresponds to a pixel density of 281 ppi with a visible area of 12.3 inches. Corning Gorilla Glass 4 covers the front of the touch display, rendering it damage resistant to a large extent. The screen of the Dell Latitude 7285 is coated with an anti-reflective coating to prevent reflections on the smooth glass surface. In contrast, a smear-resistant coating makes it easier to remove smears from the substrate.

The Sharp panel obtained a very good average luminosity of 490 cd / m2 during our measurements. Just Dell Latitude 5285 with 522 cd / m2 will keep up. The Dell Latitude 7285 loses some important points in our analysis with only 85 percent of the brightness range. The Lenovo ThinkPad X1 Yoga will shine here and move up 95%. The Dell Latitude 7285 uses PWM, measured at 922 Hz with a brightness of 20 percent to control brightness. There is also some visible clouding around the edges in a completely black display, which is not very strong however.

The  speakers are mounted on the top edge and in laptop mode they point to the user. The performance offered is quite good, even though the compact design lacks the bass. All speakers master video calls and play music very well, without glitches at larger volumes. Speech is clearly registered and passed to the conversation partner, without any external noise.

The processor is a highly energy-efficient Kaby-Lake family version introduced at the beginning of this year. Due to its low TDP, the Intel Core i5-7Y57 is a dual-core SoC that is suitable for passively cooled tablets or convertibles. The clock frequency of the two processing cores is 1.2 to 3.3 GHz where the stated peak Turbo speed is the single core load. The Intel Core i5-7Y57 clocks at a maximum of 2.9 GHz if loading is placed on both cores simultaneously. While the processor’s subjective quality can be defined as great, the Dell Latitude 7285 is compared to the other rivals. The tests of Cinebench-R15 clearly show the processor’s limitations. ⠀ The RAM 8-GB and SSD 256-GB obviously suffice for areas of use such as office work, and the dual-core soC quality is equally suitable for multimedia use.  Optionally, the Intel Core i7-7Y75 is also available for the Dell Latitude 7285, which has a slightly higher clock speed. The company offers alternative options for RAM and SSD as well, but the cost rises rapidly. Although our test system has nearly a minimal specification, it still follows the price / performance ratio.

Should you buy the Dell Latitude 12?

We liked the excellent materials range and respectable style. The Dell Latitude 7285 has very good indications for the screen, which shows a high brightness and very good color quality. Honestly, we expected less processor performance, but because Dell does not use its 4.5 watts TPD, the performances are slightly above our expectations. All of the test results without exception show that the Dell Latitude 7285 will keep up with the competition well with the Intel Core i5-7Y57.

The system disappointed us a bit with the energy consumption, since we expected much better values from the frugal components. This also culminated in the inconsistent life of the battery. The idea of placing a further battery in the dock is fine, and prevents our test comparison from getting worse.