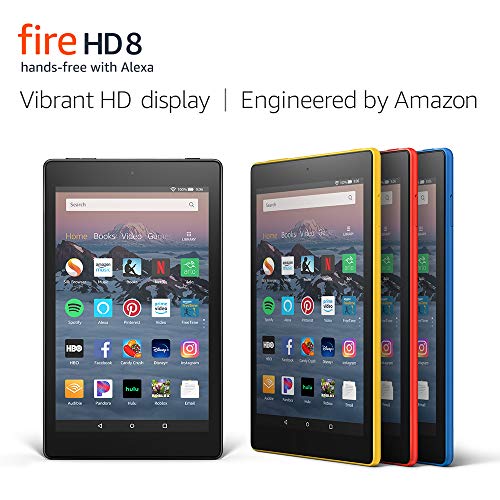 The Amazon Fire HD 8 is very similar to the Fire HD 10 version. The main difference between them consists of the size, but other than that, they operate quite the same. To give you an idea of the first impression you will have when seeing this tablet, imagine a medium-sized device with a solid plastic cover. On the back, it has the Amazon logo and the rear-facing camera. Its design is plain and doesn’t involve anything special. You will find the volume buttons on the top, the power button, a 3.5mm headphone jack and a micro USB port.

This device is so sturdy that it can be thrown around without breaking. While it isn’t recommended to turn it into a throwing device, it is good to know that it can withstand physical shocks. As you can probably imagine, this also means that it is quite bulky and its shape isn’t the sleekest. Being quite small, it isn’t too heavy. It will not put too much pressure on your wrists if you hold it for a long time, but it might be more comfortable to use it together with a stand.

The Amazon Fire HD 8 come with an 8-inch HD display that renders images, video content and the entire interface with beautiful, crisp, bright colors. It has just enough power to be able to handle the apps that it has pre-installed. The design of the Amazon Fire HD 8 (2018), while distinctive, is perhaps a little too utilitarian, the screen is bright and has a reasonable resolution but the color reproduction is poor. This is a low-cost tablet that comes with lock screen adverts by default, which can be removed if you agree to pay a certain amount as a one-time payment. The Fire HD 8 wears Amazon’s own version of Android. Some users appreciate the change of skin, while others condemn it, stating that it is weak and low performing. It all depends on who uses it and for what purpose. A nice feature is the Show dock, which allows the tablet to transform itself in a smart speaker.

This tablet, just like its larger counterpart, has two speakers that deliver the decent sound, yet a higher quality sound can be listened to when using headphones. Users can listen to music directly from the Amazon Digital Music Store or through Amazon Music Unlimited.

In terms of performance, the Amazon Fire HD 8 doesn’t excel, but it isn’t the worst either. Let’s say that its components allow it to perform directly proportional with their value. Being a low-cost tablet, you probably already suspected that it is equipped with cheaper elements compared to other, more advanced models. It has a single-core Geekbench score of 627 and a multi-core score of 1,677. When running basic apps, you won’t even notice the difference between this tab’s operation and other models. On the other hand, when trying to run heavy games, it becomes challenging for the system to keep up. That is where you might encounter a crash or two.

The battery life of this Amazon Fire version is decent. It will last for up to 10 hours if you use it lightly and it will drop by 20% while playing music and games. No matter how you choose to use it, it will still work for a few good hours. This isn’t the biggest concern, though. the battery takes a few hours to fully recharge, which could lead to frustration, because you might not always have the time to wait for it.

Should you buy the Amazon Fire HD 8?

For a tablet that costs so little, it is only natural for the Amazon Fire HD 8 to have some limitations. Having Amazon&#39;s Android-based OS, you will observe that it is programmed to consume mostly Amazon content. After unboxing and turning it on, the tablet suggests free books and TV shows to fill up your library. This is normal for a tablet designed by one of the largest e-book manufacturers. However, you must analyze your needs and see if such a model would be compatible with your requirements.

Flexibility and portability do not represent an issue when it comes to carrying around this 8-inch tablet. It isn’t as sleek as we would want it to be, but it isn’t too bulky, either. Holding it is comfortable, so if you are a heavy reader and would like to have a tablet that is not a Kindle, maybe this is a good option for you. Also, you should buy it if you have children and you let them play from time to time.

This series of tablets from Amazon is dedicated to a specific niche. If you believe that you are part of that category of users who enjoy navigating on a tablet and maybe reading with less distractions, using a basic technology, then this device could really work for you.