Amazon absolutely knocked it out of the park with their early Kindle devices, but a lot of people were still pretty surprised when they stepped squarely into the affordable Android tablet industry.

However, devices like the brand-new Amazon Fire HD 10 have won people over effortlessly, and today this device is considered to be one of the very best 10.1 inch tablets money can buy! 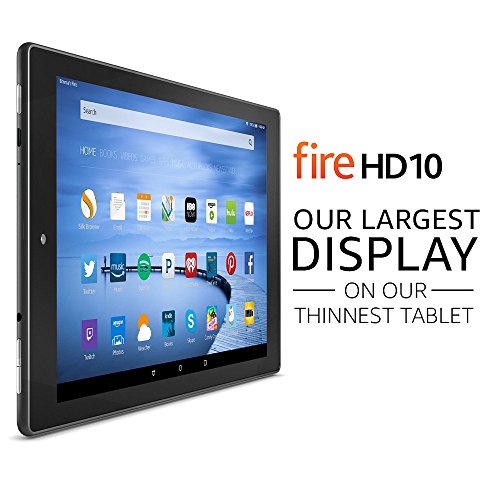 If you’d like to learn a little bit more about everything that this amazing piece of technology brings to the table, you’re going to want to check out all of the inside information we have for you below.

To say that the folks at Amazon upped their game when it comes to industrial design on the new Fire tablets would be the understatement of the century.

Gone for good are the flimsy feeling tablets that used less than top quality components, and they have been replaced by one of the best premium tablets you’re going to find at this price point.

The screen is gorgeous (a 10.1 inch high definition display with more than 1 million pixels and a resolution of 1280 x 800), and the build quality is top notch across the board.

Of course, even the best built tablet isn’t going to be worth anything unless you have the “guts” to match the amazing design – and this is somewhere that the Amazon Fire HD 10 really excels.

The quad core processor (1.5 GHz) produces blazingly fast speeds, and you’ll have the option to take advantage of 16 GB or 32 GB of internal storage. It would be nice to have expandable storage on this tablet like some of the other premium options out there, but with the unlimited cloud storage for all Amazon content – effortlessly accessible from the Fire – it really isn’t all that necessary.

Both of them are pretty solid options, though they likely won’t be quite as nice as the camera that you have in your phone.

One of the major differences between this tablet and the rest of the premium Android tablets on the market is that this platform is running the Amazon OS and not “stock” Android.

You aren’t going to be able to access Google Play or other traditional Google applications as effortlessly as you would have been able to with other tablets, but you’ll also be able to natively enjoy all of the Amazon applications and content that they provide.

All things considered, there is a reason why so many people are over the moon with the Amazon Fire HD 10.

It has everything that most people are looking for with very few drawbacks whatsoever, and because it comes bundled with the same “Special Offers” that the Kindles do, it’s going to be a lot cheaper than most people expect as well.